I may have never seen a nonhorror film as relentlessly, brutally, and crowd-pleasingly violent as this skintight adaptation of the long-running British comic-book character, who, since 1977, has been judge, jury, and executioner to the perps and citizens of sprawling, tower-blockaded Mega-City One. As for this film version? It’s bloody fucking brilliant.

And I do mean bloody. (Fun fact: Think you’re the biggest Dredd fan around? I doubt it: I lost my virginity in 1982 while wearing a Judge Death T-shirt I’d purchased from London’s famed Forbidden Planet comic shop just days before. Top that.)

Strangely, the comic that first unleashed the Judge Dredd character, 2000 AD, never really caught on in the States until the advent of (duh) the Internet, and it still lags far behind even Marvel and DC’s weakest offerings in terms of American sales. Which is interesting since from the start, the series has been one long, hyperconvoluted riff on totalitarianism, the police state, fascism, and the gray land between law, order, and madness. In the meantime, the U.K. has somehow allowed itself to become the most surveilled kingdom/parliamentary democracy in the world. Heads up, Yanks: You’re No. 2.

Director Pete Travis and writer Alex Garland have nailed the core aspects of the perpetually scowling Dredd’s universe with a gritty simplicity. There’s not an ounce of fat on Garland’s script – unlike the misbegotten 1995 flatliner that miscast an overbulked Sly Stallone in the role – and nearly all the action takes place in one vast tower block. You can almost hear the grimace of Judge Dredd (Karl Urban, doing terrific work under the Judge’s omnipresent helmet) creaking like old leather as he’s saddled with rookie Academy of Justice Judge Anderson (Olivia Thirlby, equal to the task at hand) – a female no less, with psychic abilities. It’s training day in Mega-City One – a hazy, muggy megalopolis that stretches from New York to Washington, D.C., which is the lone post-nuclear refuge of humanity – and the pair end up at Peach Trees, a 200-story residential tower controlled by the bloodthirsty Ma-Ma (Lena Headey, stone-cold evil incarnate) and her gang. They, in turn, control the supply and demand of the new drug in town, “SLO-MO,” which slows the user’s perceptions to 1% of their normal speed. Sounds like fun, except when you’re plummeting those aforementioned 200 stories.

From here, it’s a simple cat-and-mouse game between Ma-Ma’s legions and the Judges, but the filmmakers keep your eyes glued to the action and have you rooting for the (let’s face it) fascist tool Dredd and his scary-smart partner. It’s a win-win situation for the audience (who probably weren’t expecting this level of mayhem) and the (bound to be) Judge Dredd franchise, which kickstarts like 20,000 volts to the heart, or a burst from Dredd’s Lawgiver MK II. Absolutely, 100% kickass. Now would someone please get busy on the Tank Girl do-over, please? 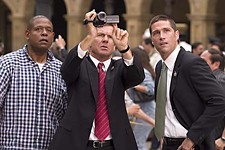 Vantage Point
Like Rashomon, this Dennis Quaid vehicle replays a single event – the assassination of the U.S. president – from multiple points of view.