House at the End of the Street

Not to be confused with The Last House on the Left, The Little Girl Who Lives Down the Lane, The House by the Cemetery, or any other addresses near the corner of Suspense Street and Rue Morgue, this is one property that's been off the market for good reason. Completed well before Lawrence's Oscar-nominated turn in Winter's Bone, this is a strictly middling nonshocker that's not doing anyone any favors by actually securing a theatrical release. It's purely meh-ville all the way and the asking price ($7.50 for a matinee) is at least $6 too high.

Shue and Lawrence are Sarah and Elissa, a mother-and-daughter pair who've just scored a verdant summer rental by moving in next door to a "murder house" where, a decade or so before, a little girl went cuckoo and slaughtered her parents before she fled into the woods and was given up for dead. Beggars can't be choosers, though, and Sarah's dad is nowhere around (he's a musician, see). While Sarah busies herself cornering the market on Anxious Mommy Merlot, Elissa makes friends and more with Ryan (Thieriot), the now-teenage survivor of the next-door massacre, much to the chagrin of the gossipy townsfolk.

In a twist that will surprise no one, the long-lost sibling/killer Carrie Anne (Link) is indeed alive and unwell; she's being kept prisoner and raised as borderline feral by Ryan. Escape, pursuit, and lots of woodsy cinematography ensue.

Lawrence is fine as the solo-parented teen and Thieriot does a mean Tony Perkins (circa Pretty Poison, but on downers), but the sheer tedium of the storyline means you never really care about any of them. Shue, to her credit, looks like she's trying to crawl out of her skin, but hey, anything to get away from this hell house, right? Right. 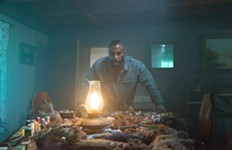