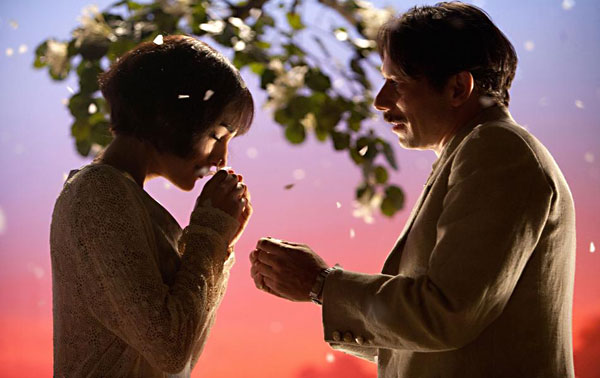 In 2007, Marjane Satrapi and Vincent Paronnaud made an international splash with their animated feature Persepolis – a smart, funny film based on Satrapi’s graphic novels which tell the story of her childhood and adolescence in Iran prior to and during the fall of the Shah’s regime and the start of the Iran-Iraq war, as well as her exile and return to Iran. Now, these visual artists are back with another film, Chicken With Plums, which is based on another of Satrapi’s novels published in France, though this one is not autobiographical. Chicken With Plums, also, is not an animated film. It is a live-action work, but that is not to say the film is reality-based or unimaginative. This is a film of wondrous imagery, comic riffs and sad meditations, elements of magic realism, theatrical staging, poetry, mystery, and – yes – animated sequences.

The fact of the matter may be that, ultimately, there may be just too many narrative techniques at work in Chicken With Plums for it to congeal into a mouth-watering dish. Many of the parts are quite tasty, though, and make the meal worth sampling. Not the least of these delights is the multifaceted performance of Mathieu Amalric as the world-renowned Iranian violinist Nasser-Ali, who one day decides to quit life and die. At the outset, his reason for this drastic measure seems to be his broken violin, but by the end of the film, our understanding of his thoughts has deepened. Flashbacks and flash-forwards to his earlier life and the future lives of his children enrich our outlook, as does a tête-à-tête with Azrael, the Angel of Death (Baer). Omar Khyayyam poetry is quoted, opium is smoked, and Isabella Rossellini wafts through as a cloud of smoke – her indomitable spirit as Nasser-Ali’s mother taking this form following her death. Then there’s the character of Irâne (Farahani), a none-too-obscure reference to the unattainable Iran. 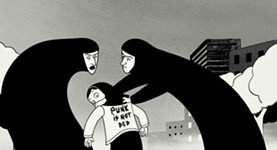 Persepolis
This remarkable animated film tells a contemporary story about an Iranian girl’s coming-of-age while navigating the usual pitfalls of adolescence and the Islamic revolution of the Eighties.