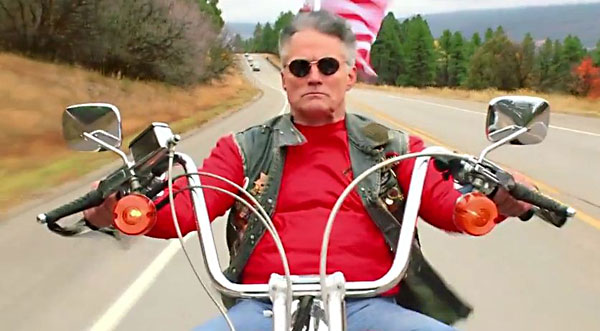 What to make of this hysterical screed from somewhere in America where Christmas, and therefore Christ, is under attack from all sides? I sure don't notice such goings-on in Austin, which goes out of its way to light up everything from the Capitol to the entire length of South Congress. The Paramount Theatre screens Miracle on 34th Street while the Alamo gets "High for the Holidays." (Everyone else is at the elliptically spiritual Tim Burton's The Nightmare Before Christmas, which, dead folk aside, celebrates true love, surely any deity's greatest gift.) Not only that, Austin tends to produce movies considerably more subtle than a sledgehammer blow (cue Fred Williamson as a Grinchy ACLU-type) to a sparkly, sweet-smelling pine, which is what Last Ounce of Courage amounts to. It takes the joy of Christmas and makes it bellicose. I'd rather have a black licorice candy cane, thanks.

Teague plays the aptly named (or not, depending on your sense of history) Bob Revere, a Harley-riding, small-town mayor and decorated – Vietnam, we assume – veteran who has lost his son to the current Middle East killing grounds and ends up mentoring his grandchild Christian (Gomez) about the meaning of liberty, all while wondering what in the hell has happened to godless America since the Eisenhower administration.

Teague is a mass of apoplectic veinage and affronted "patriotism." This is a film about PTSD that's yet to happen: the banishment of Christ via the secular "mainstream," but like the equally wrathful Khan of Star Trek infamy, this turgid polemic just keeps … missing … the target. It's like John Milius' Red Dawn rewritten by Mel Gibson on a halfhearted bender. The film strives so much to have heart, it comes across as heartless and mean-spirited. Bah, humbug!