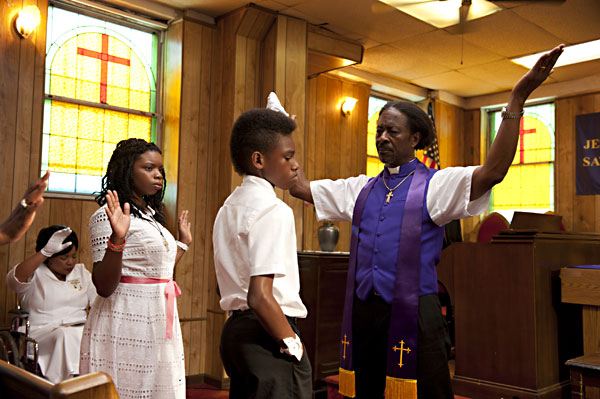 With Red Hook Summer, Spike Lee demonstrates that you can take the man out of Brooklyn but you can’t take Brooklyn out of the man. He uses the borough for at least the fifth time as the setting for one of his films which become as much about the living environment as they are about the characters, and in the case of Red Hook Summer the emphasis on the story’s Brooklyn community is even greater than its focus on the individual characters. The characters in Lee’s movie remain ill-defined, but his affection for the inhabitants of the Red Hook housing projects, New York City’s largest cluster of projects, is palpable. These are not the scary projects of Clockers where the crime and violence make everyone want to run for cover, but rather an area marked by clean and friendly pathways and a place where the basketball court on which Carmelo Anthony learned to shoot hoops is a source of community pride. Lee even reprises his role as Mookie from Do the Right Thing, who is still delivering Sal’s Famous pizzas to the hood. It’s implied that a good percentage of the Red Hook’s problems could be solved if these characters, like Mookie, had steady employment.

For the longest time, Red Hook Summer seems like it’s going to be a coming-of-age story about 13-year-old Silas Royale (Brown), who prefers to be called Flik and has come from Atlanta to spend the summer with a grandfather he’s never met, Bishop Enoch (Peters of The Wire and Treme), pastor of the Lil’ Peace of Heaven Baptist Church. The Bishop is always preaching to the boy, and the man’s ascetic lifestyle conflicts with that of the ’fro-hawked young teen, who places a wedge between himself and the world by holding his iPad 2 in front of him and recording everything he sees. Flik also makes friends with Chazz (Lysaith), a girl around his age who intrigues him with her combination of sweetness and spunk.

Red Hook Summer continues on like this without much happening for an hour and a half before a shocking revelation blows everything to smithereens. And considering the nature of the revelation, it’s perplexing that Flik’s mother would have left him in the Bishop’s care all summer. It’s just one of the many things that make it evident that Lee and his co-writer James McBride (Miracle at St. Anna) needed to spend more time on the Red Hook Summer script. There’s little drama or sense of progression in the movie until the bombshell hits, and then it just whimpers along for another half-hour until the end. The performances are unconvincing and, for the most part, result in line readings that sound amateurish and unrehearsed. Even Peters, who is usually an electrifying actor, only comes alive on the pulpit where his sermons enumerate all the social ills in the Hook. It’s these fiery lessons about the joblessness, childhood pregnancies, AIDS deaths, and parental responsibilities – also echoed in a scene between Bishop Enoch and Chazz’s mother, Sharon (Simms) – that seem to be of most interest to the filmmaker. And interesting topics these are, too. We only wish they came out seeming more like a movie than a sermon.