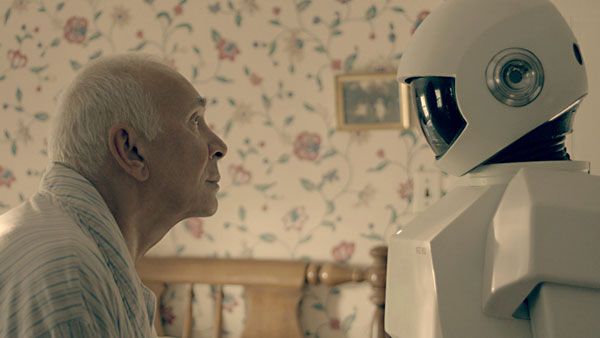 What a weird, winning little movie is Robot & Frank, which explores what happens to the essential self as the memory goes. Oh, and it’s a heist picture. With robot butlers. I’m not sure I’ve ever seen anything quite like it.

A hulk of peevishness and lost purpose, Frank (Langella) is a former – if not quite reformed – cat burglar. Long-divorced and semi-estranged from his two grown children, Frank lives alone in upstate New York in what the film lightly calls “the near future.” His house is a mess, and his mind, it appears, is in similar disarray. He walks regularly into town to lunch at a long-closed diner – “I ate there last week,” Frank puzzles anew, the disappointment always fresh – and he also makes a habit of shoplifting from the chichi bath shop that replaced his beloved diner. When the proprietess screeches at him, “Who is responsible for you?” the heart hurts for him: Indeed, who is responsible for Frank?

Soon enough it’s a robot, a “health-care aide” brought in by Frank’s son (Marsden) to monitor his diet and restore order to his days. At first Frank can’t stand the thing – a bit of a clunker, it looks like a life-sized LeGo Stormtrooper, and it’s always nattering away about organic greens – but then Frank catches on that the robot (voiced by Peter Sarsgaard) would make a heck of an accomplice in his newest breaking-and-entering scheme, and a common ground is found.

Robot & Frank doesn’t belabor its futuristic setting. The technology on display, including a library-helper robot ostensibly modeled after a file cabinet on wheels, has a charming first-generation feel about it, and the electronica original score (by Francis and the Lights) casually recalls the “this-is-the-future!” soundscape of so many Eighties’ movies and their now goofily dated-looking hovercrafts and ray guns. The future here is less a setting than a thematic concern of Christopher D. Ford's nuanced script: The robot provides Frank, so lost in his past, with a reason to look to tomorrow.