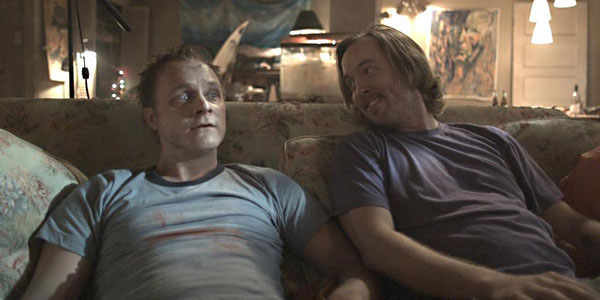 Like its title character, this undead buddy comedy was presumed dead, distribution-wise, after it hit the festival circuit (including Fantastic Fest) in 2009 and then dropped out of sight. It's hitting video-on-demand and local theatres the same day, so you can pick your platform, but my guess is it plays a lot better when sitting in a crowded Alamo Drafthouse theatre plied with beer and burgers than it did on the dim, dark DVD screener this critic was sent. Director Prior, whose primary work, um, prior to this was as a visual effects coordinator on various Don Coscarelli projects – including Bubba Ho-Tep and Phantasm(s) III and IV (all of which, by the way, we love) – does a passable job of creating a buddy comedy centered around the undeceased Iraq War vet Bart (Anders) and his stoner best friend Joey (Wylde). Both actors give it their all. Wylde, alternating between pilled-up chill and manic, pop-eyed panic, is particularly good. Ultimately, though, the film is a solid 15 minutes longer than it really needs to be and more annoying, The Revenant feels as though it longs to be an American riff on Shaun of the Dead. (Intentional or not, some of Wylde's mugging seems lifted straight from Simon Pegg's playbook.)

Unique to Prior's film, at least in the canon of the modern horror comedy, is the concept of the “revenant." Neither zombie nor vampire, bullet-riddled Bart needs blood, not brains, to survive as one of the walking dead, and immediately passes out once the sun rises. It's a weird combo that hasn't been tried before, and since King's character Mathilda is a Wiccan, she's able to provide some context for the mysterious transformation.

Both the yuks and the yucks are plentiful, but by the time the film reaches a montage sequence of these two boneheads (well, one bonehead, one dope) laying waste to Los Angeles gang members and other wastrels in an attempt to satiate Bart's thirst for the red stuff, you're more than likely wishing you were watching Simon Pegg and Nick Frost in something else entirely. The similarities between the two horror comedy pairings are just too obvious to be ruled out as coincidence.