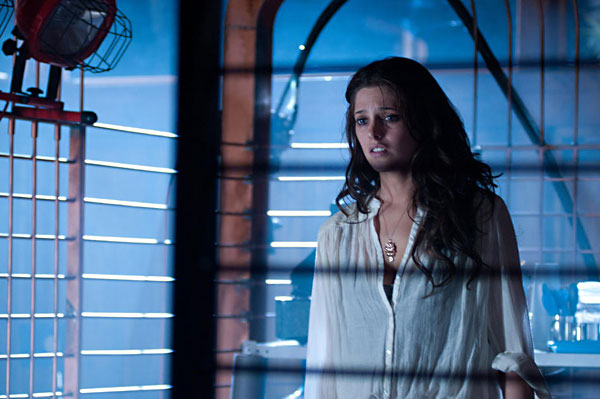 Dreamlike, in the sense that it lulls you to near somnolence during its brief running time, and derivative to boot, Lincoln's debut feature is a snoozy riff on ghostly doings in a moribund Los Angeles suburb-from-hell. It looks great – cinematographer Daniel Pearl shot both the original Texas Chainsaw Massacre and its 2003 remake – but Lincoln's story is all buildup and no payoff. Like its titular haunt, the film is a tease that irritates more than it does anything else. Nods to better films (Poltergeist, Flatliners) and borderline better films (the Paranormal Activity franchise and its crapshoot offspring) do little to burnish Lincoln's horror credentials. On the whole, it's enough to make even diehard genre fans break their Ouija boards in two.

Greene (of the Twilight zone) and Stan play Kelly and Ben, a pair of twentysomething enigmas babysitting Kelly's parents' desert home. Prior to this, Ben was involved in a ghost-raising exercise in college that left a friend dead and Ben semihaunted. Eventually, vaugely weird things begin to happen, but nothing really happens as spooky mold extrusions appear on the walls of the house and dead dogs appear at random. Vague is the key descriptor here, as both the entity – whatever it is – and Kelly and Ben's relationship sag under the weight of the faux suspense and tomandandy's clattery score. There's a functionally creepy séance that cues the film's tone at the start, but The Apparition almost immediately dissolves into so many shots of mobile bedclothes and techy, ghost-catching phenomena that it's barely risible, much less coherent. Come to think of it, it's a lot like the departed shade of a better, longer movie, hovering in tatters before us, vanishing when we blink. When you look into this abyss, it yawns back at you.