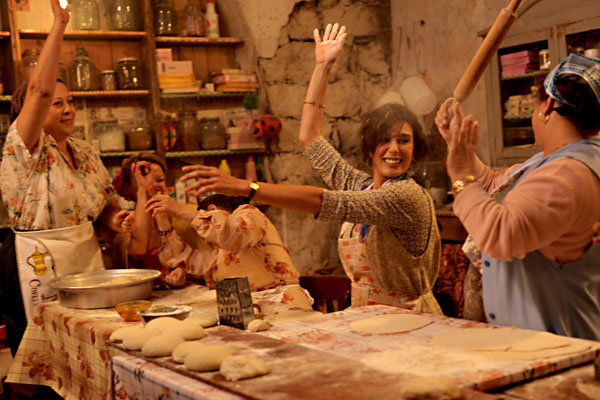 Where Do We Go Now?

Winner of the People’s Choice Award at the Toronto International Film Festival in 2011, this Lebanese film looks at what might happen to the area’s ancient religious conflicts between Muslims and Christians if women ruled the region instead of men. The film starts somberly as women dressed in black proceed to the town cemetery – one side reserved for Muslims and the other side for Christians – to polish the gravestones and pray for their dearly departed, many of whom we presume to have been killed in religious skirmishes. The introduction of a TV set into the local cafe has amped up the remote village’s tensions with its constant blare of the turmoil in the world outside.

The women cook up an underhanded plan to trick their menfolk into camaraderie by feeding them some hash brownies and importing some exotic dancers to satisfy their more libidinal hungers. Amale (played by the writer/director Nadine Labaki, who performed the same tasks in her 2007 film Caramel) takes a lead role in organizing the women. With a sweetheart on the other side of the local religious clash, she has a vested interest in resolving the conflicts. A peak of merriment comes as the women gather to bake and sing as though they were in a musical. It’s a high point of energy in a film that is otherwise more concept than action. The humor in Where Do We Go Now? is otherwise low-key and sporadic, and in marked contrast to its darker aspects. It’s a “what if” story that’s hopeful but doesn’t ring true.

Capernaum
Lebanese drama of the destitute is tough to watch, but tougher to live