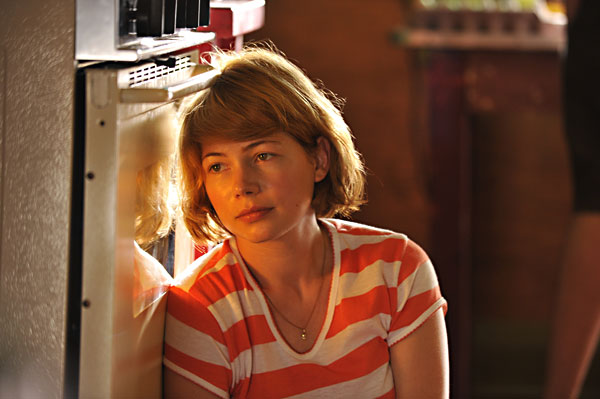 Scrubbed of makeup and wearing summer cutoffs, the actress Michelle Williams could pass for 14 years old. That ability to slip into a childlike guise serves her character well in the very fine Take This Waltz, a fully adult inquiry into commitment and carnal desire, and the hard choices we make when the two don't align.

Williams plays Margot, a freelance writer with vague ambitions to become a novelist. She's in her mid-20s, but Williams, a marvel of nuance and chewed-lip tumult, evokes Margot's unsureness in her little-girl's bye-bye wave and her habit of drawing a hand worryingly to her mouth. Married for five years to a cookbook writer named Lou (Rogen), Margot seems to relish his companionship and the haven they've built together in a rented row house in Toronto. They have their private jokes and a special language rooted in baby talk, but she has trouble articulating her desires to him. When she interrupts foreplay to ask him to not use his mush-mouthed coo during sexual congress – in an attempt, freighted with meaning, to draw boundaries and not commingle their cuddly ways with sex – Lou pulls away, stung. Later, on their anniversary, she chafes at the kind of silence we tend to call comfortable. Lou argues there's nothing to talk about – that there's nothing he doesn't already know about her, or her day, or her inner life. (And, one intuits, that belief in "no surprises here" makes for the reassuring bedrock of their marriage, at least in Lou's book.) In fact, Margot is near-sick with a potentially marriage-imploding secret: That by chance she met a man, Daniel (Kirby), of exceptional magnetism, and the thought of him consumes her.

In her affecting first feature, 2005's Away From Her, writer/director Sarah Polley also considered emotional and sexual fidelity, but Take This Waltz doesn't give Margot the same kind of "out" (for lack of a better word) that the earlier film did, in its portrait of a woman afflicted with Alzheimer's who finds new companionship as her old life (and husband) recede from memory. Margot knows precisely where her loyalties should lie, at least according to her marriage vows, and she knows what's at stake when she takes long walks with Daniel, an artist and rickshaw driver who excites her intellectually, sexually, and – simply, but crucially – as a promise and province of newness.

The film can feel a touch overscripted, but Polley and her actors effect true-to-life rhythms of speech – speech that has gone fallow with Lou, or predictable from proximity, and practically whirs with melancholy and arousal with Daniel. (The film pauses to wonder if the melancholy itself is what's so arousing.) There is also a casualness about bodies – I'd call it European, but this is a Canadian film through and through – that explores without didacticism the range of human physicality, from the functional ho-hum of showering and evacuating waste to the exhilarating extremes of sexual pleasure, and chronicles without comment how the human form ages and changes.

Polley is a subtle filmmaker, and a surprising one, too. (This may constitute a vague spoiler, so tread lightly.) Take This Waltz arrives at a point that in a less challenging film would mark the happy ending. In 360 degrees, the camera rounds a couple kissing, set to the titular song by Leonard Cohen (in a terrific soundtrack bolstered by fellow Canuck Leslie Feist and Micah P. Hinson). A couple revolutions, and we might plausibly cut to closing credits, awash with good feeling. But Polley keeps her camera in motion, chronicling a fixed place but an evolving landscape that further contours and then crystallizes the film's major preoccupations: commitment and carnality and the hard choices this particular woman makes to resolve the two. 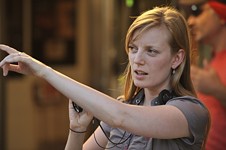 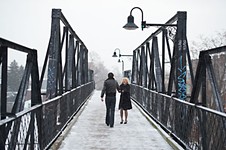 Stories We Tell
Canadian filmmaker and actress Sarah Polley goes looking for her biological father and comes homes with a wise and poetic documentary about the nature of truth. 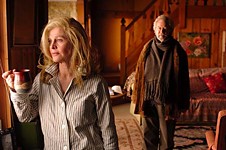 Away From Her
Based on a short story by Alice Munro and confidently directed by actress-turned-director Sarah Polley, this drama starring the stunning-as-ever Julie Christie is a penetrating story about love's mysteries.