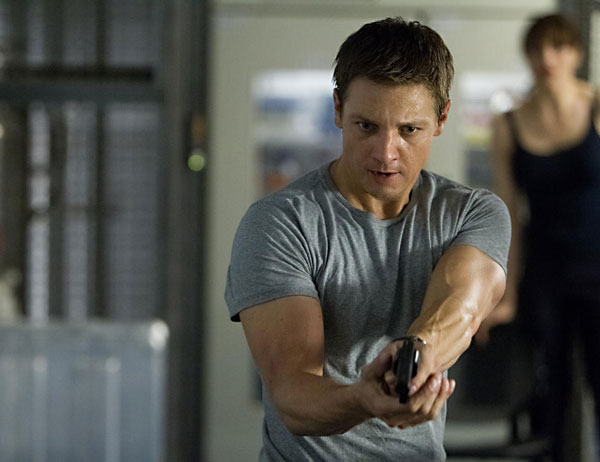 The overthinking man’s filmmaker, Tony Gilroy may be too damn smart to direct his own scripts. He has a long and impressive string of screenwriting credits – including all four films in the Bourne series – but The Bourne Legacy is only his third film as a writer/director, following Michael Clayton and Duplicity. The Bourne Legacy is bedeviled by the same kind of overly fussed, jigsaw-puzzle plotting as those films – Gilroy dodges narrative clarity like it’s whiffing of bubonic plague – and, frankly, it’s a minor miracle that this franchise reboot works at all. In fact, it’s working so hard you can practically see the sweat stains, and it asks the viewer to work hard, too. (I lost minutes trying to recall the difference between the Treadstone and Blackbriar ops from previous installments; they’re both name-checked more than once here.) And yet, it works, so much so that after two and a quarter hours, I was startled – and not a little disappointed – when the closing credits kicked in.

The film introduces new lead Aaron Cross (The Hurt Locker’s Renner) as he scales the Alaskan wilderness on a solo training mission. Aaron is a “beta program,” so-called in the ruthlessly anonymizing speak of his higher-ups: a super-trained, genetically rejiggered agent of Operation Outcome, the third-generation in the Treadstone assassin family tree. (He’s like Jason Bourne, but cut from a superior cloth; the film hints there are even finer threads coming down the factory line.) As Aaron makes his way across a barren snowscape, the film zips to and fro in time and space, interlacing footage from The Bourne Ultimatum – Paddy Considine’s murdered journalist and Joan Allen’s CIA agent-turned-whistleblower get replayed – with a new cast of characters, including the unconsciously complicit Dr. Marta Shearing (Weisz), who will grow to regret treating Aaron like a lab rat, and Eric Byler (Norton), a retired military man now burning the international espionage network he masterminded. Byler personally recruited Cross, in a chilling speech likening them both to sin-eaters who are “morally indefensible and absolutely necessary” that could double as the defense plea of every agent and counteragent, government official, and CIA spook scampering throughout the whole of the series.

The script (which Gilroy co-wrote with his brother Dan) is needlessly overcomplicated in this early stretch, ever barking out old names and prior dirty dealings, and playing too close to the chest the significance of Cross’ regular pill-dosings of “greens and blues.” (Regarding whether he ever gets the mean reds, poor fellow, the film remains mum.) The Bourne Legacy is a slow-starter – not in terms of pacing, which moves at a whiz, but in terms of viewer engagement. But when Aaron and Marta’s paths finally cross, the storyline’s muzzy grays contrast to sharper blacks and whites. More significantly, it puts Renner and Weisz in the same frame, and that’s when the picture starts to zing. The hero is humanized, the film finds its focus, and the action – breathless, savage, and exquisitely staged – matters because the film has finally produced characters worth worrying over. (As for the action, I suppose one could begrudge Gilroy for tapping out another rooftop foot chase so soon after The Bourne Ultimatum’s staggering Moroccan number, but this one – set on cheap corrugated metal in Manila – is pretty dandy, too.)

Not to speak ill of the recently departed – because surely Matt Damon carried on his increasingly buffed shoulders the Bourne franchise to great reviews and great box office receipts – but his Jason Bourne was sort of a stick in the mud. The Gilroy brothers make Aaron more devilish; he also has more to lose when his handlers leave him to the wolves. (Literally. There’s a whole thing with wolves here, in a kind of dumb metaphor that nonetheless reaps snarly rewards. Because wolves are terrifying.) The script and Renner’s lightly roguish characterization smartly avoid Bourne’s all-business demeanor, which bordered on automatonlike, for a livelier and less upright hero. Renner has the same swiveling skill as Daniel Craig to play the seducer and the thug, depending on the angle, and he and Weisz make exceptionally fine foils who evolve under duress into tenderly attentive companions. There are sparks, which the filmmakers resist stoking into a fire. No rush: The Bourne series hasn’t been reinvented, only revived, and there’s plenty of fuel still to burn.

Duplicity
Julia Roberts and Clive Owen star in this new thriller about schemers and double-dealers. 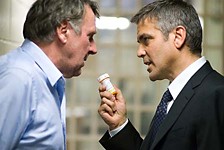 Michael Clayton
This smart and thoroughly entertaining film asks the question of where a lawyer’s ethical responsibility to zealously represent a client ends and the societal interest in achieving justice begins.