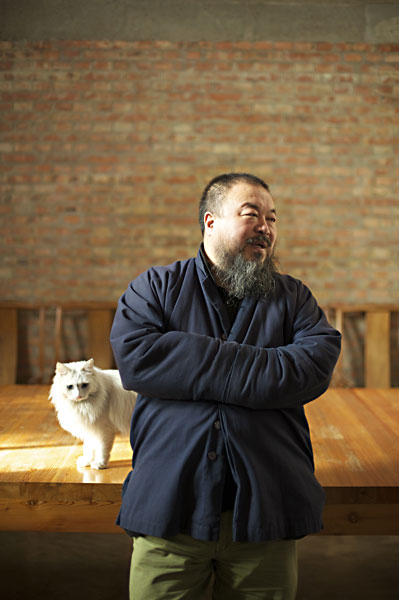 “Never retreat, retweet.” So says the parting slogan in Ai Weiwei: Never Sorry, the documentary portrait of China’s best-known dissident artist, who has recently adopted Twitter as his medium of choice. Bounding into international prominence only during the last few years, Ai Weiwei has become an inspirational figure through the clarity and daring of his conceptual art and his willingness to put his burly body on the line. Ai is China’s most celebrated contemporary artist as well as a worldwide model of galvanizing self-expression.

Ai achieved international renown in 2008 as one of the designers of the spectacular Bird’s Nest stadium built to house the Beijing Olympics. Yet before the Olympics began, Ai publicly denounced the Games as Chinese political propaganda. Also in 2008, the devastating earthquake in China’s western Sichuan province occurred, in which more than 5,000 children died in schools built with shoddy construction. Ai traveled to the province and became vocal in the protest of government malfeasance, vowing to collect and use the children’s names in an art project. Many Chinese citizens flocked to his side, spreading out to gather the names that the government was unwilling to assemble. Major exhibitions of his art in Munich and London further solidified Ai’s worldwide reputation, while a popular blog he wrote in China was shuttered by government officials, which is when Ai took to Twitter. Fomenting dissent, 140 characters at a time, came easily to an artist known for such succinct images as the superimposition of his middle finger over a shot of Tiananmen Square. Ai’s body has suffered blows by police officials, he’s been denied exit visas, and he witnessed the government demolition of his newly built studio in 2011. Last year he was held in custody by the Chinese government for 81 days, and after his release was presented with a bill for more than $2 million owed in back taxes. In a flood of support from the Chinese people, small amounts of money were sent to his home by individuals, some of the currency floating into his compound in the shape of paper airplanes.

All this and much more is captured by Alison Klayman’s digital camera, which happened to be at the right place at the right time. An American journalist in China, Klayman worked with Ai on a short film documenting the photographs he had taken as an art student in New York in the Eighties. Klayman thus had access to Ai during the last few tumultuous years and was able to document his activities and observe the artist at work and in interviews. The story doesn’t always follow a straight line, but reveals much about Ai’s upbringing as the child of a famous dissident poet shunned by the Cultural Revolution, and about his personal life as a husband and new father of a child born to a woman who is not his wife. The documentary is as much a rallying cry for freedom of expression as it is a portrait in progress of an artist whose career is ongoing. Though we might wish for more insight or explanation, Klayman’s film remains an incredible document of a courageous individual whom the Chinese officials would prefer to make disappear.

For an interview with the director, see "Portrait of the Artist as a Righteous Dissident."