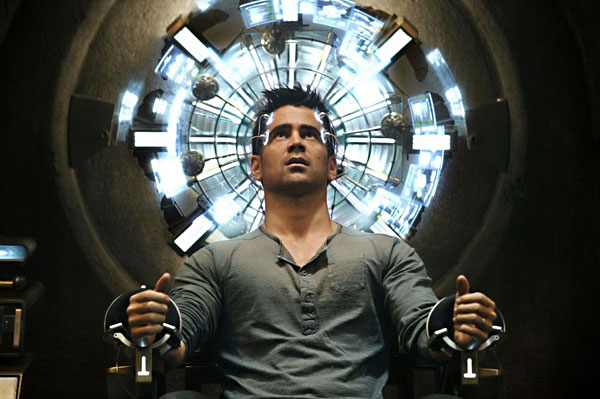 This second feature-length adaptation of Philip K. Dick's paranoiac sci-fi thriller may be more in tune with the grindingly bleak times we're currently living through, but it's also very much a product of director Len Wiseman – and all that that implies. Fans of Paul Verhoeven's 1990 original will immediately notice a few major changes: no Schwarzenegger, no Mars, no exploding heads, and, potentially the major deal-breaker – no sense of humor and precious little satire to speak of. Wiseman, who’s helmed the superior biters-vs.-furries franchise, Underworld, is a dab hand at taking the preposterous and making it seem utterly real. He's that rarest of Hollywood types, a director who invests himself fully, genre be damned. Dick, whose 1966 short story, "We Can Remember It for You Wholesale," was the inspiration for both cinematic adaptations, would probably have sided with Verhoeven's mordant take on the intersection of identity, consumerism, and "reality," but that's just a hunch on my part. Wiseman's film dispenses with the pop-culture-laden irony in favor of blazingly fast action and a disorienting editing style that – more often than not – makes your head spin.

And not necessarily in a good way, either. Farrell, bulked up as everyman Doug Quaid, is fine in his role as a man tormented by nightmares that may, in fact, be actual memories of a life he cannot recall. His wife, Lori (Underworld's hyper-athletic, fang babe), assures him it's all in his head and, of course, she's totally right, but not in the way Quaid hopes. Set in a dystopic 2084 that lifts an awful lot from Ridley Scott's Blade Runner and a pinch from The Fifth Element, Quaid's psychotropic journey from obliviousness to self-actualizing, anti-government insurgent feels right, but Kurt Wimmer and Mark Bomback's script rarely gives the viewer time to ponder this poor guy's exceedingly existential crisis. Total Recall kicks off at something approaching Mach 10 and never lets up for one moment. If Verhoeven's version is a woozy-cool head trip and a half, Wiseman's take on Dick is the cinematic equivalent of mainlining bad bathtub crank. It's fun while it lasts, but you'll be hard-pressed to remember (wholesale or otherwise) what the hell you just watched 24 hours later.

That said, Paul Cameron's cinematography, commingled with plenty of sweeping CGI images of a nasty-looking, semi-near future, is immersive in the extreme, and the film is the better for it. On the other hand, the great Bill Nighy (Shaun of the Dead) is completely wasted in a hopelessly underwritten role as rebel leader Matthias, and even Biel is short-changed as Quaid's other-life not-quite-wife. Audiences will almost surely divide equally along Verhoeven/Wiseman lines. This Total Recall is fast, furious, and frequently confusing fun, but to be completely honest, it lacks the snappy, weirdo vibe of its predecessor. If this is the future, I'd rather forget it. Underworld: Evolution
This tale of the ongoing hostilities between vampires and werewolves is pockmarked by the discordant likes of Puscifer and Slipknot.