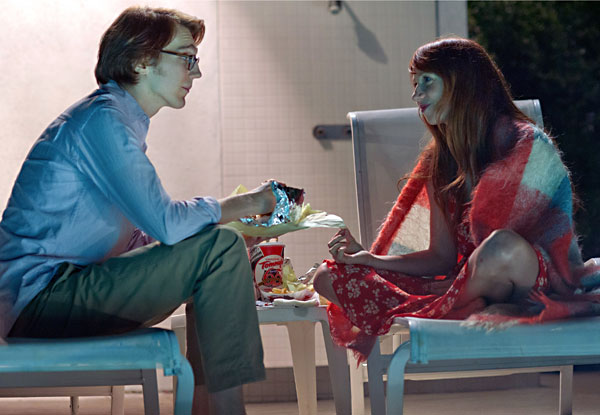 Ruby Sparks doesn’t. Spark, that is. Oh, the film is sprightly and wholehearted, sweetly in thrall to its bold central conceit, and endearing as a puppy with boundless energy. You want to like it. And you do. It’s just that it never, you know, it never sparks. It sometimes comes close, although it’s more likely the embers of romantic-comedy formulas burning brighter simply because they’ve been stoked instead of stepped on for a change.

Calvin Weir-Fields (Dano) sits in front of his old Olympia typewriter, amid the stark white walls and clean lines of his Los Angeles home, working on his next novel. Ten years ago, when he was 19, he penned a generation-defining novel beloved by readers far and wide. But now the second novel just won’t come, and he sees a therapist (Gould) to help him work through his writer’s block. A therapeutic writing exercise assigned to him by his shrink births Ruby Sparks (Kazan), a woman who had first appeared in his dreams. But through a transubstantiation never explained by the movie, Ruby comes to life and easily slips into the role of Calvin’s dream girl. At first he thinks he is going mad when physical remnants such as her bra and toiletries show up in his home, but when Calvin realizes that other people can see Ruby, too, he stops seeking answers and locks the manuscript away in a drawer. Although Calvin’s not one to mess with perfection, his more practical brother Harry (Messina) urges him to further fine-tune Ruby’s qualities. Soon he learns the power of the pen, and this magical Pygmalion tale is off and running. Except that it never builds much speed. For the most part, Ruby Sparks runs in place, hitting the same marks over and over again, venturing only gingerly into the darker corners of the situation, and allowing Kazan to play the indie gamine and daffy muse while at the same time putting the familiar character contrivance under the microscope.

In addition to portraying Ruby Sparks, Zoe Kazan wrote the screenplay, and co-stars in it with her real-life romantic partner Paul Dano. The film affords the actress an ample stage to show her range, and the role must have more than a little resonance for someone who makes a living bringing characters to life from the page. Dano excels when playing pent-up characters, and is no different here. But Ruby and Calvin spin their wheels when it comes to having anything new to say about this age-old situation. A trip to Big Sur to visit Calvin and Harry’s parents – earth mother Annette Bening and nutty artist Antonio Banderas – is full of undeveloped characters and time-filling situations. Married co-directors Dayton and Faris (Little Miss Sunshine) are unable to find the story’s highs and lows. In addition to their avoidance of the story’s inherently dark aspects, the directing pair never finds the full-throated humor that also lurks within. It all pretty much exists on an even keel, and that’s not really the provenance of love and magic. 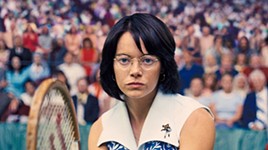 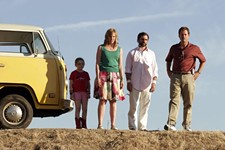 Little Miss Sunshine
Like any indie comedy worth its weight in quirkiness, Little Miss Sunshine is packed with offbeat characters, all struggling to find meaning in life – in this case on a road trip to a children's beauty pageant. And the film is so much fun, it's almost impossible not to enjoy the journey.