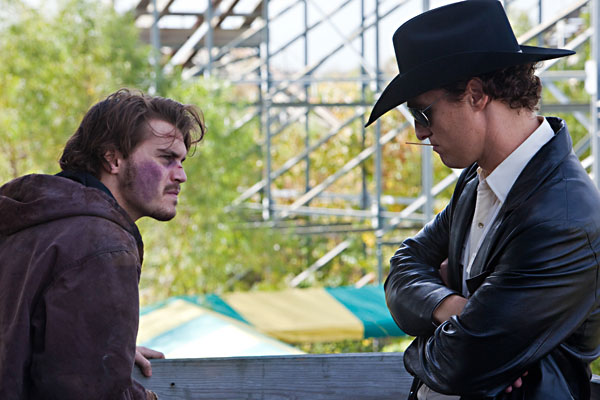 You've got to feel at least a twinge of sympathy for the squeamish moral arbiters at the MPAA (the Motion Picture Association of America ratings board). Like art and pornography, they may not have a codified definition of Very Fucking Disturbing on file, but they know it when they gag on it. This Texan trailer park noir is as perverse and ugly as they come, and I mean that in a nice way. It's thoroughly riddled with a cast of wormy characters enacting a kind of Southern gothic bottom-feeding frenzy that puts even the Kardashian clan to shame. And, lo and behold, as the titular cop-cum-assassin, McConaughey coughs up one of the very best characters of his career. Bongos? He don't need no stinkin' bongos. He does just fine with a family-sized bucket of K-Fried-C and an oily, dead-eyed grimace that leaks evil like Dallas leaks strip-mauled and soul-killing sprawl.

Adapted by Steppenwolf Theatre playwright Tracy Letts from his stage play and directed by Friedkin (The Exorcist and, more recently, the underrated Bug, which was also originally a Letts play), Killer Joe would have made for some fine grindhouse fare back in the day. It throbs with echoes everything from Jim Thompson's The Killer Inside Me to Elia Kazan's Baby Doll to Little Miss Marker, and trust me, you're going to want to take a scalding hot shower with a steel-wool loofa after its ecstatically nihilistic final sequence. Sleazy, yes, but Killer Joe is more than the sum of its sultry, sordid parts. That's thanks to some seriously fearless acting from McConaughey and Gershon in particular, but really, the whole ensemble cast is uniformly excellent (again, in a very creepy way).

Hirsch is Chris Smith, an idling twentysomething burnout who is in deep and deadly debt to local kingpin Digger Soames (Macaulay). Chris turns for help at the doorstep of the double-wide trailer shared by his morally deficient, mentally moribund dad (Church, perfect); skeevy stepmom Sharla (Gershon); and googly-eyed, virgin-naif sister Dottie (Temple). A plan is hatched, with matricide at its black and hardened heart, but none of these exurban wastrels figures on Killer Joe's icy tenacity and queasily imperturbable mien. Absolute doom ensues.

At 76, Friedkin still holds our gaze with striking, often ghastly visual images, and despite the fact that McConaughey's entire wardrobe appears to have been rented from Villains "R" Us, Killer Joe lands blow after blow to the psyche. It's ostensibly a Southern-fried comedy of terrors, but what little humor the film evinces almost immediately lodges in your windpipe like an errant bit of K-Fried-C gristle. Kin to Blue Velvet's Frank Booth, McConaughey's Joe is sociopathy incarnate in black-leather Tony Lamas, looking to profit, or kiss, or kill, or, preferably, all of the above.

See "Not Your Average Joe," August 3, for an interview with William Friedkin. 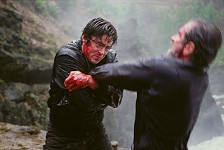 The Hunted
Possibly the least cost-effective game of hide-and-seek ever devised, The Hunted is also great fun for those of us who miss playing in the mud ...