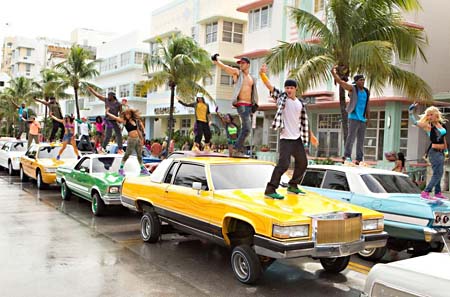 I can think of any number of better travelogues for Miami’s South Beach, but this fourth entry in the improbably popular "underground" dance series is as derivative as they come. Screenwriter Jenny Mayer owes cash money to the writers of Breakin' 2: Electric Boogaloo (Jan Ventura and Julie Reichert, in case you were wondering), so closely does the plot of this high-gloss advertisement for Nike products mirror the story of Boogaloo Shrimp’s travails in that 1984 proto-hip-hop classic.

Unlike Breakin' 2, which sported a totally goofy sense of self-aware humor and an uptempo ghetto vibe that made it irresistibly silly fun, Revolution fails to impress or even entertain beyond its psychotically overchroreographed dance routines. Sometimes less is better – think of, well, everything Gene Kelly ever did, frankly, and you'll realize that subtley and nuance tend to lodge in the cultural mindset longer than Madonna-on-meth-esque overkill. That pretty much sums up the hyperactive set-pieces in director Scott Speer’s streetwise take on things. (Granted, even Breakin', Krush Groove, and their early Eighties ilk lifted their core inspiration from the old Judy Garland/Andy Hardy "Let's put on a show!" schmaltz fests. The idea is as old as the concept of teenagers.)

"Serious" dancer Emily (McCormick, particularly wooden here) is the daughter of a cartoonishly ruthless developer (Gallagher in a thankless, one-note role) who has his eyes (and his wrecking ball) on the off-off-Ocean Drive neighborhood of a troupe of urban dancing fools dubbed the Mob. Led by ultra-whitebread Sean (Guzman), the Mob pulls off a nifty trick: staging public performance art/dance happenings that are, in essence, flash mobs with better-defined physiques. Yep, they're doing flash dances. Emily falls for Sean and conspires against her old man to defeat the proposed high-rise initiative, and, well, I'm confident you're already aware how that works out. (If not, you obviously haven't been paying attention to the Step Up franchise.)

In short, it's nothing you haven't seen countless times before and, while it's not offensively bad, it also adds zero to the same old routine. Meh. Midnight Sun
Ill met by daylight in this photosensitive romance.