Penis-obsessed, man-child film comedies can crown a new king: the Danish import Klown. This movie about a guys’ weekend, during which lame-brained ideas multiply exponentially, is more ribald and politically incorrect than The Hangover, to which Klown bears a vague similarity. Thus it’s fitting that The Hangover’s director Todd Phillips already has the American remake rights, with plans to showcase Eastbound & Down star Danny McBride. I can guarantee that Hollywood, of necessity, will water their version down to a trickle, so if you crave insemination you’ll want to hook up with the original seed.

Klown’s roots lie in a Danish TV show that was written by and stars Frank Hvam and Casper Christensen, who perform the same services in this feature, along with the show’s longtime director, Mikkel Nørgaard. Adopting a handheld, single-camera visual style, the film resembles the observational comedy of humiliation that has become so familiar to American viewers of late. The film’s protagonists, Frank and Casper, use their real names, but the characters are such lunkheads it’s doubtful they could be scarred by either humiliation or embarrassment. An episodic tale follows these overgrown man-boys on an epic canoe trip dubbed by aggressive horn dog Casper, the “Tour de Pussy.” Frank, however, is severely hamstrung in this department due to the presence of his nephew Bo (Petersen), whom he has kidnapped in order to prove to his girlfriend, Mia (Lyhne), that he can be good father material. (Should you ever want to think of Katherine Heigl in Knocked Up as a feminist icon, you should check out Klown wherein all the women are either loving enablers or shrewish harpies about the menfolk’s boorish behaviors.)

Events pile on top of one another as the film’s incidents go from selfishly unsavory and vulgar to virtually unmentionable. Frank, in particular, sells the jokes with his cloddish demeanor, almost convincing us that this character is a hapless rube lost in the mysterious world of what women want. All the humor revolves around dick jokes, albeit with a chillier Nordic savoir faire than witnessed in our off-color American smut. Much of the film is very funny, but the comedy turns cruel and harsh once it’s directed toward the size of young Bo’s willie. Yet even Bo forgives the men their trespasses in a sentimental ending that’s too saccharine a capstone for all the earth-scorching that’s come before. Frank and Casper (the characters and the writers both) err by devoting themselves to building up these sorry specimens of masculinity rather than deconstructing them to see what makes them tick – or throb, as the case may be.

For more on the film, see "A Raunchy Comedy With Sacred Cows in Its Sights," July 27.<.p> 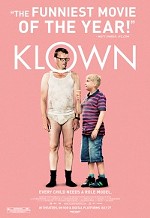