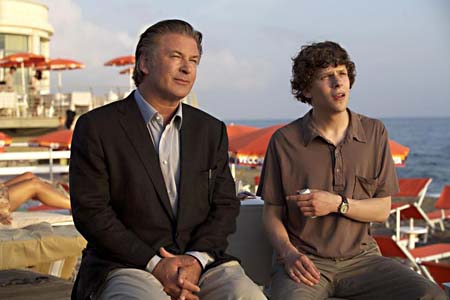 To Rome With Love

The original, more euphonious title for Woody Allen's 42nd feature film was The Bop Decameron, but Allen changed course, he told an interviewer, when he realized the illiterate masses (I paraphrase) didn't have a clue what The Decameron was. And besides, Boccaccio's 14th-century tale about 10 Romans swapping stories and sitting out the plague didn't have anything to do with his script, he said. He flirted with Nero Fiddled for a while before settling on the postcard-generic, free-from-menace To Rome With Love. He didn't just lose lyricism in the name-change; the Decameron association might have given the film a glimmer of grandness – a raison d'être – that’s sorely missing from this ambling, just-passable picture.

Like a cat swatting spiritlessly at multiple balls of yarn, To Rome With Love amuses itself with four discrete storylines, each one chronicling a respite from the status quo, a brief bleat of enlivening disorder before regular life resumes. In one, Jesse Eisenberg (The Social Network) plays an American architect who falls in love with his girlfriend's best friend, an impetuous starlet (Page). In another, Allen (appearing onscreen for the first time since his 2006 dud Scoop) plays a failed opera impresario who thinks he's hit pay dirt when he hears his daughter's future father-in-law singing in the shower, an everyman il divo. Two other stories are conducted almost entirely in Italian: The elfin, elastic-faced Roberto Benigni plays a white-collar schlub who inexplicably becomes an overnight celebrity; meanwhile, a young couple, separated on the first night of their honeymoon, are tempted by so much flesh in the big city, including, notably, that of Penélope Cruz, playing a salty prostitute.

There are a few funny set-pieces, most especially in Allen's storyline when his operatic discovery turns performance-shy, à la the Looney Tunes' cartoon short, "One Froggy Evening." And in Benigni, Allen has found a likable proxy to float ideas about the arbitrariness of celebrity anointment and about being the plaything of paparazzi. But Allen stops shy of articulating those ideas beyond the obvious. Indeed, every storyline concludes in the same circular fizzle.