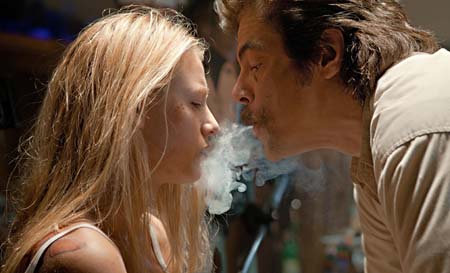 Savages provides us with a glimpse into the Oliver Stone of yore – the director of lurid, visceral, and menacing crime stories – a facet of the filmmaker we haven’t seen much of since Natural Born Killers and U-Turn. The film is based on Don Winslow’s bestseller, and Winslow co-wrote the screenplay with Stone and Shane Salerno. It’s the story of Chon (Kitsch) and Ben (Johnson), independent growers and sellers of the best marijuana around. Chon is an ex-Navy SEAL who brought back the seeds for the business from Afghanistan; Ben is the botanist who, in addition to growing pot with off-the-charts THC levels, is also a do-gooder who builds water wells in Africa and performs many other charitable deeds. O (Lively), short for her given name Ophelia, or maybe her orgasmic avatar, is the woman who loves them both and lives with them in hedonistic, copacetic bliss in a luxury home in Laguna Beach, Calif.

The Mexican drug wars follow their natural path north of the border in Savages when Chon and Ben’s operation becomes subject to takeover by a cartel helmed by Elena, a ruthless but not heartless leader in a Cleopatra wig, and her chief goon and henchman Lado (Del Toro), whose vicious depravity and loathsomeness are bottomless. O is kidnapped by Elena’s minions and held as a bargaining tool. Travolta complicates things as a crooked DEA official whose hairline is receding as rapidly as his morals. Stone and cinematographer Daniel Mindel make the entire experience seem hallucinatory with their mixture of film and video imagery, saturated colors that sometimes turn to black and white, rewinds, and other optical tricks, as well as a conclusion that pulls the rug out from under the audience. It’s volatile, nasty, hypnotic, gory, and irrestible. But then O opens her mouth to continue with her vacuous and omnisciently impossible voiceover narration, and the spell is broken. Then it’s just another day at Laguna Beach. 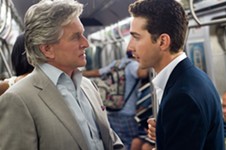 Wall Street: Money Never Sleeps
Oliver Stone delivers an enlivening and wickedly entertaining take on the occasional angels and plentiful demons that have run the country into financial ruin.