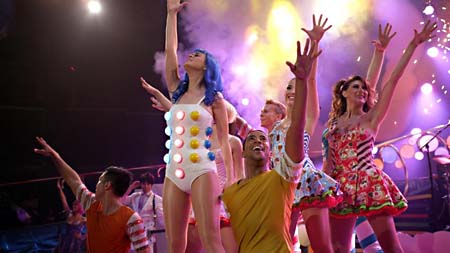 Katy Perry: Part of Me

The theatre at which I watched the pre-release, “for the fans” screening of this candy-colored, pseudo-documentary whatsit was less than one-quarter full. I'd fully expected legions of screaming tweens and harried moms, all grappling for a better, more 3-D view of the slyly dorky princess of candy-pop anthemics. Still, the fact that there wasn't a bobble-headed, ADHD gum-snapper kicking the back of my seat to the beat of Perry's be-all-you-can-be track, "Firework," meant I could focus on the movie – which isn't so much a movie as a canny, inoffensive slice of brand management and marketing. And as such, it's not half bad.

My personal taste for bubblegum pop and candy-punk has largely gone unmentioned in these pages over the years. Suffice it to say, I'm a sucker for a hook-laden, teen-dream rave-up, and although my tastes veer more toward the manic, retro-Ramones-y spastics of UK indie outfit Helen Love, this backstage glimpse into the life of "overnight sensation" Perry proves her to be a true dork, and a tireless one at that. Surprisingly, considering the calculatedly confessional hit, "I Kissed a Girl," and the just plain weird, "Ur So Gay" (I get where she's coming from on that one, but still), Perry, as we discover, was raised in a strict Christian Pentecostal household. Her parents, itinerant preachers, pulled up stakes every two months or so to move on to the next gig, and forbid Perry and her siblings from listening to or experiencing the secular world until they were teens – at which point Perry released her first album in Nashville, a gospel collection that wowed no one (including God, apparently).

Two years later, at 17, Perry cut and ran to Los Angeles, eventually spawning the megahit LP Teenage Dream in 2010. And then there was the doomed marriage to ex-junkie/UK comedy phenom, Russell Brand, which forms a largely unseen part of the emotional arc of Katy Perry: Part of Me. It makes total sense, though – when viewed through the warped lens of Perry's rigidly enforced, churchgoing early years – that these two opposites would attract. Brand, however, only appears in the film for, say, 30 seconds, if that. Katy cries, the tour goes on.

Perry's kept a close eye on her own marketing – resulting, for better or worse, in a sartorial preference for cupcake-inspired couture and giant, spinning, faux lollipops covering her bosom (make of that what you will). She is currently the reigning princess of some fairy tale, Candy Land life that'll likely ferment into something far more interesting and dark fairly soon. Self-consciously kooky pop stars such as Perry have an expiration date pre-built into their rider – and she's no Lady GaGa (yet) – but Katy Perry: Part of Me is nonetheless a fascinating (although certainly stage-managed) peek behind the pretty, pink curtain of its subject's rocket-sled fame. If you have an 8- to 16-year-old underfoot in the house, there are worse ways to spend a Saturday afternoon.