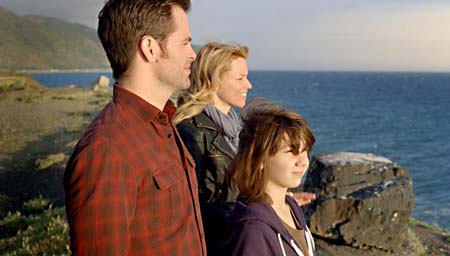 I'm not sure what People Like Us is trying to be, or who "us" is. For a moment, I thought it was some obscure Sally Fields Oscar in-joke: "People like us, they really like us." But no, that's not it at all. It's really more Ordinary People Like Us, and for all its fine points, of which there are more than a few, it still struck me as parboiled Hollywood hokum. There's a great cameo by Mark Duplass, and a breakout turn by young actor D'Addario. If they ever get around to remaking Jonathan Kaplan's incendiary Over the Edge from 1979, this kid is built for it; he's got the nihilistic/hopeful tone of both those days and these days down pat. But for all its emotional and familial kerfuffles, People Like Us is an honorable misfire – good intentions and all.

Much of this has to do with director Kurtzman, who cowrote the script with Robert Orci. Certain Alamo Drafthouse patrons, circa May 2009, will recall that Kurtzman and Orci penned the 2009 Star Trek reboot, which screened in Austin – with Leonard Nimoy, Paramount Pictures, Kurtzman, Orci, and Tim League working in quantum tandem to keep it all very hush-hush – mere hours after (or was it before?) the official Australian world premiere. Kurtzman and Orci came out beforehand and spoke of their love of Trek. Chris Pine, as the young Captain Kirk, turned out to be, after much fan speculation, a perfect pre-Kirk. In People Like Us, he's also very good as Sam Harper, the reasonably successful son of a minor Los Angeles music producer who's spent his whole life trying to avoid his rock & roll patriarch. The old man's death forces his hand, and he learns (from a lawyerly Philip Baker Hall) that he has a sister – the alcoholic single mom Frankie (Banks, very fine), and a nephew that his parents apparently didn't want complicating their already chaotic lives. It's a stretch, but this is L.A. and it makes a sad kind of sense.

I got the feeling that this was a way for Kurtzman, Orci, and Pine to stretch their writing and acting chops prior to Star Trek: Round Two. After all, no one – by which I mean everyone – wants to be trapped aboard the U.S.S. Enterprise forever, and to his credit, Pine plays "normal" awfully well. The stories, of course, are all about responsibility – either to a starship or a fractured family, they turn out to be remarkably similar. Pine is, dare I say, an actor with a deep emotional core, and the new Kirk is a character who, in the end, just wanted to make things right – which is exactly what Pine's character attempts in People Like Us.

This time he goes where all of us have gone before in one sad, sorrowful way or another. The stars are so far away, but the human heart is here and now, no matter the stardate. Like I said: a honorable misfire, with maybe one-quarter of the impulse engines spinning in the here and now.

Which, right now, may be all we need.

The Mummy
Tom Cruise does the monster mash