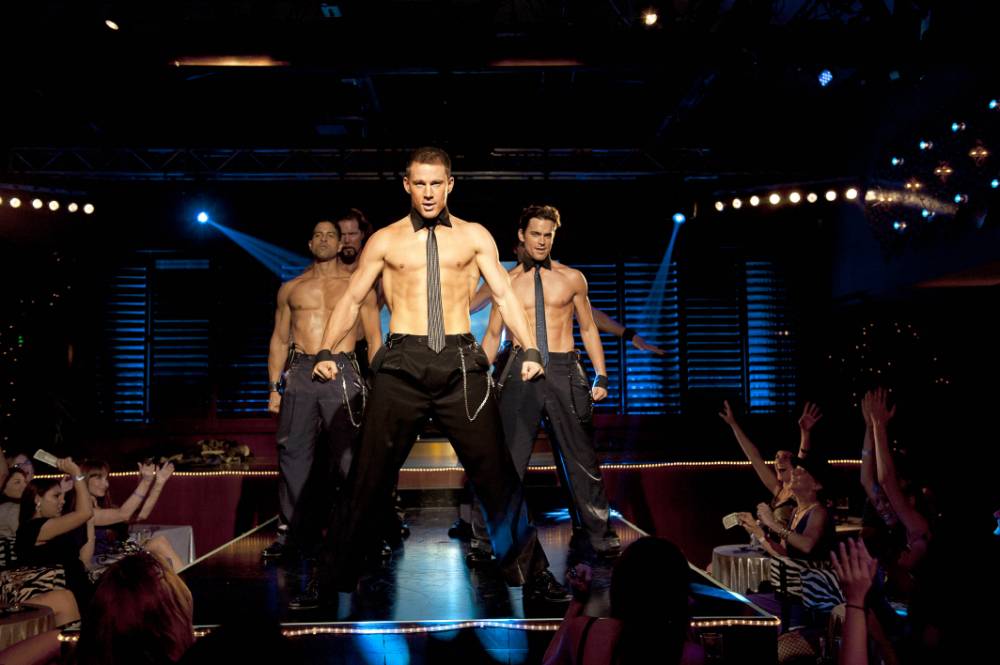 After draining all the prurience from The Girlfriend Experience, his 2009 film about a high-dollar call girl, Steven Soderbergh, in his new film, Magic Mike, restores some of the lust and excitement we generally associate with stories about sex-industry workers. You need to wait only a couple of minutes after the start of the movie before soaking in a lingering, full view of Channing Tatum’s naked behind – a mere tease for the many lascivious images that are yet to come. Tatum is the Mike of the title, the lead dancer at Xquisite – an all-male strip revue geared toward women in Tampa, Fla. Many of the women in the audience who I saw the film with shrieked with delight at this point, already fully primed for the cavalcade of bodacious male booty yet to come. They were not disappointed.

The idea for the film is based on Tatum’s early experience as a strip dancer (is exotic dance a unisex term?) prior to his breakthrough on the Hollywood screen in the teen-oriented Step Up dance movies. The actor still has his dance moves and casually chiseled physical appeal that makes him a tantalizing onscreen figure. In the film, Mike aspires to get out of the business and become a furniture maker one day, but the local banks aren’t too eager to loan money to a guy whose down payment is a $14,000 wad of sticky, ironed singles. Mike becomes the best friend and mentor of Adam (Pettyfer), a 19-year-old college dropout who transforms from a deer-in-the-headlights newbie onstage to an in-demand professional besotted with the gig’s plentiful sex and drugs.

While Magic Mike heavily showcases Xquisite’s outrageous routines, the screenplay by Reid Carolin offers little more than the standard backstage story. The Kid, as Pettyfer’s character is dubbed, descends into the industry’s dark side, while Mike deludes himself into thinking that he will eventually make his getaway – all while growing increasingly enamored with the Kid’s big sister, Brooke (an intriguing newcomer who reminds me of a young Kristy McNichol), who performs the thankless job of playing the film’s only spoilsport. Most memorable of all, however, is likely to be Matthew McConaughey’s Dallas, Xquisite’s man in charge. Dallas is practically a parody of McConaughey’s public image: a shirtless, bongo-playing stud who coos, “all right, all right, all right” to the assembled ladies every night.

Soderberg enhances the meager storyline with some creative camerawork (again shot by himself under the pseudonym Peter Andrews). The club scenes are always entertaining and some of the backstage imagery is unforgettable (particularly the preshow fluffing ritual). Working in his Hollywood mode here rather than some of his more experimental fashions, Soderbergh demonstrates that style does not have to be abandoned in a push for popularity. Magic Mike is sure to be one of the guilty pleasures of the summer. To paraphrase the old Dorothy Arzner movie: Dance, boys, dance.