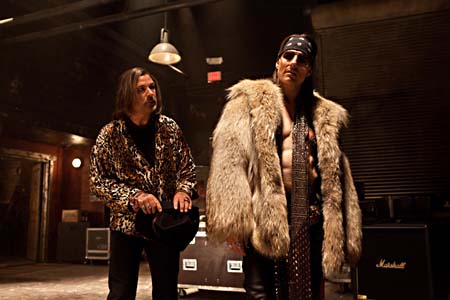 If Eighties rock nostalgia happens to be your particular cup of (P)oison, then the wall-to-wall hair metal and power balladry of Rock of Ages will make you want to (R)ush headlong into this screen (J)ourney. You’ll have to forgive the rest of us (F)oreigners for hopping the next (S)peedwagon outta here.

Adapted for the screen by Justin Theroux, Chris D'Arienzo, and Allan Loeb from the hit play, Rock of Ages joins Mamma Mia! in its creation of narrative entertainment from a pre-existing body of musical work. It seems a somewhat backward way of approaching artistic creation, one more likely to feed the nostalgia machine than the divine muses. The result shoehorns a meager storyline into a nonstop parade of stadium rock. Often, there’s not more than a line or two of dialogue spoken before the next big number starts. Creating plot from lyrics, in this case, leads to heavy-handed literalism and limited creativity. The wall of music is amusing for a while, but grows into a loud, wearying assault long before the movie’s two hours are up.

Hough (after starring in Footloose, that other Eighties revamp) stars as Rock of Ages' “small-town girl” Sherrie, who arrives on L.A.’s Sunset Strip and, in short order, is mugged, finds a boyfriend (Boneta’s Drew), lands a waitress job at the Strip’s famous Bourbon Club, and loses said boyfriend over a misunderstanding. As the Bourbon’s aging and near-bankrupt owner Dennis Dupree, Alec Baldwin lends to the proceedings a wry, theatrical air, which is offset by the unruly rock & roll ethos of his right-hand man, Lonny (Russell Brand). Outside the venue, Patricia Whitmore (Catherine Zeta-Jones), wife of L.A.’s hypocritical mayor (Bryan Cranston), is engaged in a campaign to shut down the Bourbon and all the debauchery for which it stands. Mary J. Blige turns up as the manager of a strip club, where Sherrie turns for work when her romance hits the skids. Blige, one of the film’s only bona fide singers, has her vocals as curiously subsumed to the power orchestrations that overwhelm the songs as all the nonpro vocalists.

Rock of Ages belongs, however, to Tom Cruise as the Axl Rose-like Stacee Jaxx, a dissolute rock god managed by sleazeball Paul Gill (Paul Giamatti). Cruise, who seemingly can no longer play anything but oversized parodic characters, steps into the right assless chaps for this role, although he’s nearly upstaged by the character’s pet monkey. Appearing shirtless throughout much of the film, Cruise and his rock-god poses seem to be the film’s primary selling point. Malin Akerman ably plays a Rolling Stone reporter who is the only person who calls Stacee on his bullshit. Yet for all the decent performances, Rock of Ages plays like canned spectacle. By the end, you will still “… Want To Know What Love Is.” 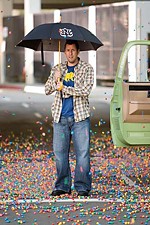 Bedtime Stories
Adam Sandler has finally found his audience: 3-year-olds. Maybe he should stop making movies already and just rent himself out for kids’ parties.