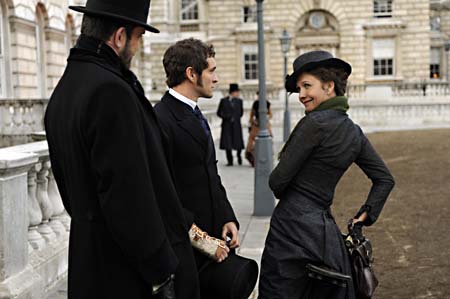 Dr. Mortimer Granville (Dancy) wants to do good work, but can't seem to hold down a job, which is how he finds his hands full with dissatisfied housewives in 1880s London. Having newly joined the practice of Dr. Robert Dalrymple (Pryce), Robert's head swivels between the two Dalrymple daughters – sweet, temperate Emily (Jones) and fiery suffragette Charlotte (Gyllenhaal). There's never any question who he'll end up with – it's as foregone as the extras hitting their marks with over-rehearsed precision and the filmmakers milking laughs from their comfortable perch in the 21st century.

Rather born to wear a frock coat, Dancy shares the stammer-blush, winning-grin methodology of countryman Hugh Grant, only with more probity and better posture. He's a milksop standing next to the leonine Gyllenhaal, the only one bringing the breath of life to this hermetically sealed curiosity. Hysteria gently amuses, yes – about as much as it irritates with its inflated sense of how sexually risqué ("aren't we naughty!") – or forward-thinking ("aren't we feminist!") – the material truly is. 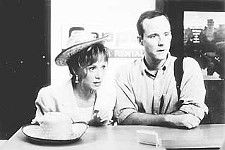 Finding North
It begins on a bridge and ends there, too, but in between Tanya Wexler's debut feature is anything but your ordinary bridge story. Vibrantly funny ...