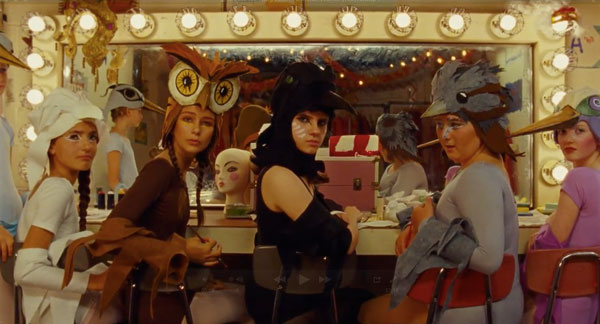 Wes Anderson fills his movies with beautiful dreamers and full-time schemers: the criminally inept Dignan, with his 75-Year Plan (Bottle Rocket); Max Fischer, the half-cocked Renaissance man-child (Rushmore); broken, fixated Francis, forcing a spiritual quest on his grieving brothers (The Darjeeling Limited). They're visionaries, really – mostly ineffective but entirely sincere in their passions – and they share the unyielding-to-reason conviction of a child, still perfectly certain he'll get to the moon someday.

Twelve-year-old Sam Shakusky (Gilman), a pint-sized romantic, is cut from similar cloth – but he isn't asking for the moon, not when he's got stars in his eyes for Suzy Bishop (Hayward). A Khaki Scout summering on the island of New Penzance in 1965, Sam is instantly smitten when he spies Suzy, a townie, playing a bird in a local production of Benjamin Britten's Noye's Fludde. He makes a plan to run away with her (Anderson's heroes are always making plans, fastidious preparation part and parcel to their visionariness). The film follows their three-day affair, wending from Sam's escape from camp – "Jiminy Cricket, he flew the coop!" exclaims his pop-eyed scoutmaster (Norton) – and the young lovers' trek through the untrammeled woods of New Penzance, to the desperate efforts of a search-and-rescue team that includes Suzy's emotionally secretive parents (Murray and McDormand), a steadfast, bachelor sheriff (Willis), and a whole mess of Khaki Scouts, who take to their mission with the duty-first relish of tiny GIs off to fight the good fight.

Hanging over the proceedings is an early tip by the narrator (Balaban), a green-beanied amateur anthropologist, warning that a monumental storm is brewing off the coast. That foreknowledge makes for a delicious kind of ticking clock that mirrors Britten's Noah's Ark opera, which plays throughout, alongside so-lonesome Hank Williams, a Françoise Hardy pop-chanson, and composer Alexandre Desplat's fairy-tale pizzicato scoring. When the storm arrives, it's a doozy, especially as it intensifies a final, thrilling chase sequence. The film certainly owes a debt to the crafty kid imps of The 400 Blows and Small Change (by one of Anderson's avowed heroes, François Truffaut) but on the evidence of his artful and electric action direction, Anderson might work wonders with a throwback thriller in the vein of his hero's hero: Alfred Hitchcock.

But back to that flood: With it, Anderson and his co-writer Roman Coppola have crafted an elegant and emphatic metaphor for adolescence, that tumultuous province of firsts and lasts. It's the end of the world as they know it and suddenly, too, a new world for the taking – an elating contradiction perfectly in step with this ever-tender film's sway between antic and woebegone.