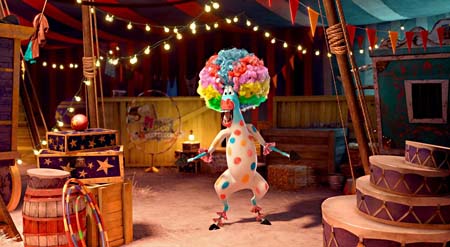 After adventures in the wilds of Madagascar and Africa, this third installment of the animated series begins where the second one ended: with the animals in northern Africa and newly overtaken by the dubious desire to return to their home at the Central Park Zoo in New York. Since the penguins and monkeys have hijacked their plane and pointed it toward further exploits in the Monte Carlo casinos, the foursome – lion Alex (Stiller), zebra Marty (Rock), giraffe Melman (Schwimmer), and hippo Gloria (Pinkett Smith) – snorkel their way across the Mediterranean in pursuit. The havoc created in the casino by the animals causes the principality’s authorities to call out their top bloodhound – the wide-hipped, pointy-breasted, relentless Captain Chantel DuBois (McDormand) – to catch the miscreants. Forced to flee, the animals find cover in the midst of a traveling circus, though it takes some convincing of its Russian tiger boss Vitaly (Cranston) to let them join up. The circus is heading toward Rome and London, where it has the chance to win a contract for an American tour.

Although Madagascar 3 is low on originality (despite having The Squid and the Whale’s Noah Baumbach on board as a co-screenwriter, as he was on the animated Fantastic Mr. Fox) and high on volume, it manages to remain amusing due to its talented voice cast and brief running time. The new characters – who, in addition to DuBois and Vitaly include the circus seal Stefano (Short) and the slinky jaguar Gia (Chastain) – are also good, as is Baron Cohen, returning as the lemur King Julien XIII and lending some pathos to the comedy through his infatuation with the bicycle-riding bear in a tutu. The circus acts and the rehearsals, which are set to Katy Perry’s “Fireworks,” make the greatest use of the movie’s 3-D capacities. Madagascar 3 may not rival the “greatest show on earth” but it’s good enough to pack ‘em in anyway. 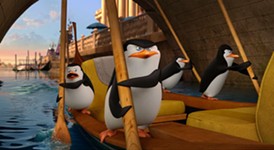 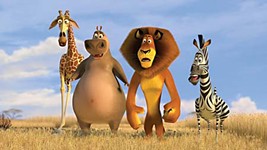 Madagascar: Escape 2 Africa
The slapstick humor remains, as does the slack plotting, in this animated sequel that's nevertheless fun for all.