Snow White and the Huntsman

The hunger for fairy tales never wanes, it seems – this is the second riff on Snow White in as many months, following April's hapless Mirror Mirror – but appetites refine, and Snow White and the Huntsman – ambitious, brutish, ruthlessly unromantic – has the right idea casting its heroine as a Joan of Arc-type crusader and its evil queen a dissertation (albeit first draft) on beauty as the most direct path to power for the disenfranchised female.

A quick preamble establishes what we already know from Uncle Walt's work: Snow White, pure of heart and boundless in beauty, loses her mother to sickness first, then her father to a usurper to the crown. Here, in a script credited to Evan Daugherty, John Lee Hancock, and Hossein Amini, the conniver is Ravenna (Theron, suitably ravenous), who commands (with wile to burn) a dark army to install her in the castle. Contrary to the blinkered-evil concomitant to most dramatizations of Snow White's foil, Ravenna has a backstory that plays to modern-day cravings for a psychologically rich villainy, which Theron milks to sympathetic effect. Yep, she sucks the lifeblood from luminous youths and dips, Countess Báthory-like, in restorative baths (one of countless visuals from first-time director Rupert Sanders that catches in the throat), but she's chafing still from early wounds, her survival bound, without her consent, to black magic. On the advice of her mirror, ever forthright when it comes to survival of the prettiest, Ravenna wants Snow White's heart on a dinner platter – especially when the princess comes of age as comely Kristen Stewart – but she's thwarted when Snow White shows a proto-warrior's cunning and flees the castle keep.

All this, it must be said, is a little drear – goth go-tos like chainmail and smote earth don't exactly enliven a mood – but when the titular huntsman arrives on the scene, the film approximates an asthmatic’s lunging gulp at pure oxygen. Chris Hemsworth, already adept with a massive hammer as Marvel Comics' Thor, wields a mighty axe here as a drunk and grieving townie bullied into hunting Snow White. Nostrils flaring and nearly blowing steam, he practically paws the ground with a bull's fervor: a man of action, and some subtlety when it comes to matters of the heart, framed in the body of a matted-haired beast. The huntsman is first tasked with tracking the hounded princess and then, in an about-face, protecting her through the Dark Forest, which sprouts hallucinogens that traffic in a terror rarely realized so viscerally in PG-13 entertainment.

In a sort of anti-picaresque, Snow White’s quest toward self-discovery touches down with a murderous troll and then to a womens-only village ravaged by self-mutilation (how better to dissuade a queen who thrives on stealing beauty?). Soon enough there are dwarves to contend with, too – and if you were worried where all of Britain's finest character actors would go once the Harry Potter well went dry, some of them at least found sustenance as dynamic diminutives (hat tip to CGI). The dwarves then ferry Snow White and the huntsman into a land called Sanctuary, which is teeming with mossy delights and faeries that complicate the Christianity introduced earlier.

So what are we to make of a white stag wafting holiness? Is it of Celtic or Roman Catholic origin? The film's forceful spiritual bent, sincere enough seeming, lands roundabouts the neighborhood of lower-case catholic in one of several avenues introduced but not satisfactorily explored, even as the action consistently thrills, and the momentum defies a two-hour-plus running time. (The filmmakers seem just as confounded by their truncated coda, edited to render Stewart suddenly tremolo and halting – a final speech on the cutting room floor, maybe? – and the camera more or less backing out of the room as if embarrassed.) With material rich enough for a miniseries but lamentably shoehorned into summer blockbuster fare, Snow White and the Huntsman, in its most illuminated stretches, finds the sweet spot between folklore's elemental urges and the hard-fought, pragmatic women-centrism of contemporary cinematic heroism. In short: No kiss from a savior-prince forthcoming, and bully that. But is it anti-feminist to worry we're left a little wanting? 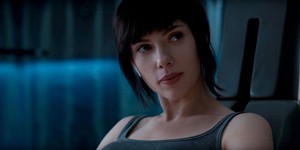 Ghost in the Shell
Scar Jo as cybernetic warrior