Just so we're absolutely clear going in, I consider Joe Dante's original 1978 Piranha to be one of the finest (and funniest) shockers produced under maverick producer Roger Corman's New World Pictures aegis. Shot in San Marcos and Wimberley and featuring a slyly subversive script by a young John Sayles, the film still stands as the pinnacle of razor-toothed, freshwater ichthyophobia. Alexandre Aja's 2010 3-D "remake" upped the grue and the body count by orders of magnitude – and the resulting film was one of my favorite dirty pleasures of the year. The final 20 minutes of Aja's film, literally overflowing with KNB EFX Group's queasily realistic practical make-up effects, left me twitching and borderline nauseous. (And that's a good thing for a horror film of this stripe.)

Disappointingly, Piranha 3DD – the inevitable sequel to the remake – has none of Dante's wit, Aja's directorial skills, or Greg Nicotero's grotesqueries. The arrival of the killer prehistoric poissons du mort – at an adult-themed water park overseen by a cartoonish, buffoonish Chet (Koechner) – is played strictly for laughs this time; so many of the gags fall flat (or even fail to trigger the gag reflex, à la Aja's film) that the film seems interminable. Panabaker plays creepy Chet's stepdaughter, a marine biologist who is rightfully repelled by the bevies of strippers and marauding frat boys running amok in her family's heretofore (we assume) quaint summer splash palace. I'm repelled at just how dull a movie Piranha 3DD turns out to be. A far-too-brief cameo from Gary Busey and an excruciatingly overlong one from former Baywatcher David Hasselhoff only serve as cheap yuks in a film clearly aimed at the lowest common denominator amongst the Fangoria set.

Screenwriters Patrick Melton and Marcus Dunstan – both of whom also scripted Gulager's pretty great 2005 project, Feast, and four of the Saw sequels – have dropped any pretense of actual suspense or outright horror here. The film is more a patchwork of darkly satirical comedy sketches and substandard gross-out jokes. Ving Rhames reprises his role from Aja's film as the now legless Deputy Fallon, and – in a direct lift from Robert Rodriguez's infinitely more entertaining Planet Terror – the understandably hydrophobic deputy is now outfitted with titanium machine-gun prostheses. Alas, even the always welcome presence of Rhames cannot mask Piranha 3DD's inherent, grating insipidity. Barely a step above a second-tier Troma film, this is one catch comic-horror aficionados would do well to throw back. 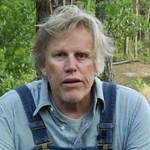