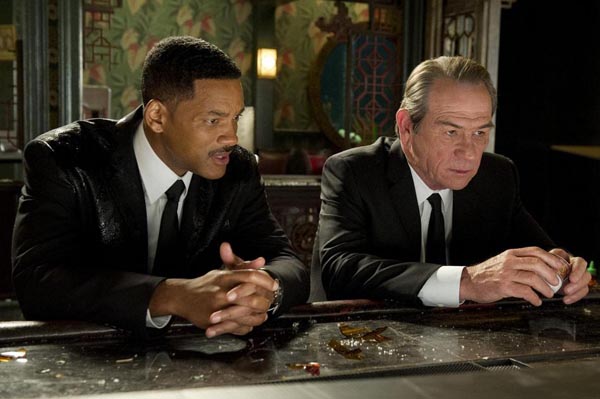 Well, at least Rick Baker had a blast. The Academy Award-winning special make-up effects legend has once again populated the alien-besieged world of Men in Black with an eye-popping menagerie of out-of-this-world oddities and outré, interstellar grotesques – not the least of which is Andy Warhol (Bill Hader), who turns out to be a deep-cover man in black keeping an eye on all the resident aliens at the Factory. Wait a minute – Nico wasn't human? I'm shocked, shocked I tell you. (A keen eye will also spot Factory cameos by Justin Bieber and Lady Gaga, who, I'm fairly certain, are already presumed to be something other than mere homo sapiens.)

Less extraordinary and considerably more banal, given the sci-fi/comedy subject matter, is Men in Black 3's story, which jumps the ectomorphic shark in high style but with a deficit of actual belly laughs. Permanent franchise helmer Barry Sonnenfeld, working from a punitively obvious story co-scripted by David Koepp, Etan Cohen, Jeff Nathanson, and Michael Soccio (all of whom have done vastly better work elsewhere), seems to have lost the ooky, kooky vibe that elevated his earlier work (The Addams Family, the two prior Men in Black) to a higher level. All of those films effectively mixed traditional comic tropes (poissons dans la mer, mostly) with subtle social commentary. In The Addams Family, the running gag was that the titular brood was a more loving and inclusive group than the socially acceptable, "normal" nuclear households around them. Similarly, both previous Men in Black films touched on America's ongoing issues with immigrants, in particular the first sequel, which hit theatres a mere 10 months after 9/11. This third outing is devoid of anything remotely resembling a clever cultural subtext. It looks and feels exactly like what it is: a cookie-cutter comedy overstuffed with 3-D (pointless), CGI-crafted spectacle (unavoidable at this point), and a soppy backstory about aging Agent K (Jones, a craggy grace note in an otherwise graceless film) that wouldn't be out of place in some alternate-universe television drama. Ick.

I won't bore you with the plot details. Suffice it to say, Agent J (Will Smith, aging in reverse, apparently) must travel back in time to July 16, 1969 (Google it) to prevent an invasion of the present-day planet Earth by an alien armada led by Boris "the Animal" (played by Flight of the Conchords’ Clement, buried under inches of foam rubber). Voilá! It's Mad Men in Black with Josh Brolin essaying the younger Tommy Lee Jones to a "T." Actually, Brolin pulls off a downright eerie Jones impersonation, and it very nearly makes the film worth seeing. But the story is cluttered and painfully predictable in every other way. Rick Baker's creepy-crawly critters continue to impress, but sadly they're the most original and imaginative thing about Men in Black 3. The humans? Don't make me laugh. 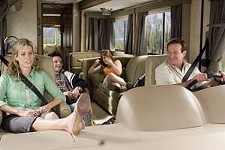 RV
Robin Williams loads his family into a camper and goes on vacation.