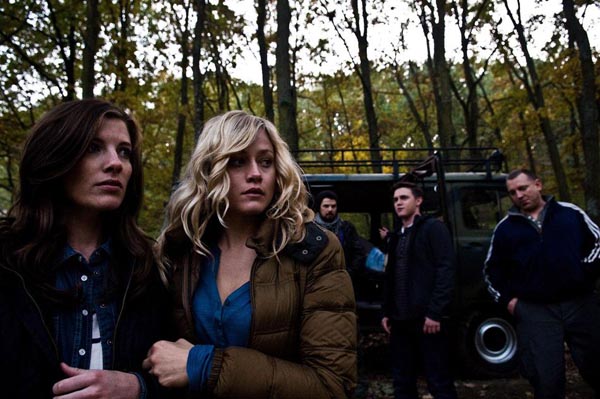 On the face of it, setting a horror film in and around the long-abandoned town of Pripyat, Ukraine, the closest town to the hulking Chernobyl nuclear power plant when it melted down in 1986, seems like an inspired idea. Although the surrounding area is a mecca for "extreme" and/or foolhardy tourists these days, the grim reality of what happened there – and the even more depressing machinations and obfuscations undertaken by Soviet authorities at the time and, indeed, for years afterwards – should feasibly provide plenty of radioactive grist for an eerie journey into the unknown. Sorry, no.

Debuting director Parker, working off a template/script by Oren Peli (who's also credited with being one of 10 producers), needn't have even used an actual cast had he been willing to grab a camera and visit the actual Ukrainian contamination zone itself (which is easily accessed); recent documentary footage of the Chernobyl site is creepy enough, with weirdly Lovecraftian nature, tendrils, vines, and stunted, freakish pines usurping the born-grim Soviet-era architecture of the region. Peli, whom you'll remember as the director who kickstarted the effectively manipulative Paranormal Activity franchise way back in 2007 instead scripts in a group of youthful American tourists wandering around moribund Eastern Europe looking for "something a little different." (Is that Eli Roth I hear smirking in the background?) Generic characters to a fault, Paul (Sadowski), girlfriend Natalie (Dudley), her friend Amanda (Kelley), and Chris (McCartney), as well as a couple of stray backpackers, team up with shady ex-military "guide" Uri (Diatchenko), who promises to take them into the blighted place for a vacation experience they won't soon forget.

Audiences will, however. The irradiated, mutant zombie critters that lurk in the plentiful shadows of Pripyat (the film was actually shot in Serbia and Hungary) are, for the most part, predictably bitey and slathering, but hardly horrifying. My blood ran … tepid, and, truthfully there are few surprises. Cinematographer Morten Søborg (In a Better World) scores high marks, however, for his lushly oppressive camerawork, which is, frankly, the real star of the show. If you're looking to be honestly in awe of something hypnotically horrific, you need only Google, or, even better, YouTube "Pripyat" on your Mac. Recent photographs and video from the dessicated village provide far more frissons than this boilerplate mutant-a-thon.