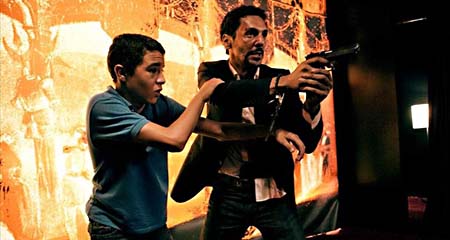 A sleepless night often begets much pacing of the floor, an exercise of trapped-space repetitiveness this French thriller cannily exploits for gasping tension. After a brief setup in which a cocaine heist ends with one of the targets dead, and the other one on the lam and dangerously able to identify his attackers, Sleepless Night confines itself to a cavernous nightclub from troubled dusk to bloodied dawn.

Vincent (Sisley), who purloined the coke but didn't pull the trigger, is summoned to the nightclub by its owner, a crime boss named Marciano (Riaboukine), who's not above kidnapping Vincent's teenaged son (Seghir) in order to get his stolen stash back. Return the coke, Marciano says, and the kid lives. Trouble is, the coke's been filched again. Out of this den of thieves – further crowded by a compromised internal-affairs agent and a Jamaican/Turkish drug lord – Vincent is a last best option for hero, and director/co-writer Frédéric Jardin and star Sisley admirably resist sentimentalizing the character. Sisley is a former stand-up comic, although you'd never guess it here: Finding himself in the eye of a colossal shit storm of his own making, his Vincent is brusque and action oriented, his face, a picture of ulceration in progress.

A 2011 Fantastic Fest alum, Sleepless Night is lean to the edge of emaciated with logic wobbles best not lingered on, but Jardin's control of tempo and tone is crackerjack. And in an era of supermuscled leads and gravity-defying action choreography, there's something pleasurably old-fashioned to the film's authentically knuckle-down fight staging. It's desperate, sweaty, heaving business bashing heads in, and I like an action hero that actually looks mussed.