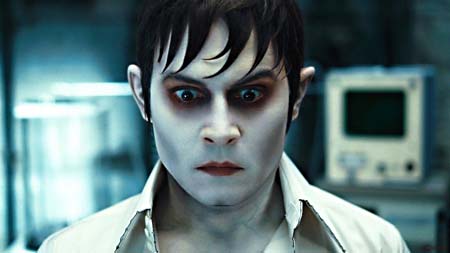 They call them reluctant vampires, the ones who live among us and rue their fangs and their eternal violation of humankind. Dark Shadows, the afternoon soap opera on television from 1966-1971, popularized the breed long before Buffy, Angel, and True Blood routinely coursed through our TV airwaves and the Twilight franchise made a killing in the movie theatres from these dark brooders and the gals who love them. Thus the time might seem right to bring back Barnabas Collins, the 200-year-old vampire who became the star attraction of Dark Shadows – though on evidence of this new film, it may sometimes be better to let sleeping vampires lie.

Certainly Tim Burton and Johnny Depp, moviedom’s co-conspirators in the whimsically weird, seem the right pair for the job. Both are avowed fans of the TV soap, which is known to have bolstered the awkward adolescent spirits of many after-school devotees, but Burton and Depp don’t seem to have allowed for the postmodern camp factor. The TV show already had its tongue poking fairly well into its cheek. Going all the way with the humor in this film leads mostly to obvious gags like Barnabas’ horror upon seeing such things as cars, television, and troll dolls for the first time. Other jokes are more coy, like the command performance by Satan’s spawn, Alice Cooper, and the clever use of other popular music from the era of 1972, the year in which the movie’s action is set. Still, the film is not an out-and-out comedy, nor is it a supernatural spooker: It can’t out-camp the original and it doesn’t make us fear the creatures of the night. However, Dark Shadows is not without some delightful moments.

Depp is as charming and eccentric as ever as Barnabas Collins, whose 200-year nap is cut short when some unfortunate construction workers dig up his chained-shut coffin. This is the eighth collaboration between Burton and Depp, and their portraits of odd men in strange places are sure to be the stuff of many a dissertation. Depp thoroughly gives his all to the role from Barnabas’ elegant, Old World speech patterns to his extruding talons that look only a bit less intimidating than the fingernails of Edward Scissorhands. Michelle Pfeiffer is also fully invested in her role as Elizabeth, the matriarch of the Collinswood mansion, and Chloë Grace Moretz gets off some good lines as her sullen daughter Carolyn, although a last-act character shift doesn’t pass muster. Jackie Earle Haley, playing the mansion’s house servant whom Barnabas turns into his own personal Igor, is deceptively amusing, as is Barnabas’ nemesis, Angelique (Green). Other characters, such as Elizabeth’s ne’er-do-well brother (Miller), his troubled son (McGrath), his governess (Heathcote), and his psychiatrist (Bonham Carter) do not fare as well and are very sketchily written (by Seth Grahame-Smith, author of the eagerly awaited Abraham Lincoln: Vampire Hunter).

Almost needless to say regarding a Tim Burton film, the production and costume design, art direction, and set decoration are all eye-pleasingly sublime. Yet in the end, Dark Shadows seems more like a mash-up of leftover ideas from Beetlejuice, Edward Scissorhands, Sleepy Hollow, and Sweeney Todd: The Demon Barber of Fleet Street – but they’re ideas without the souls of characters.