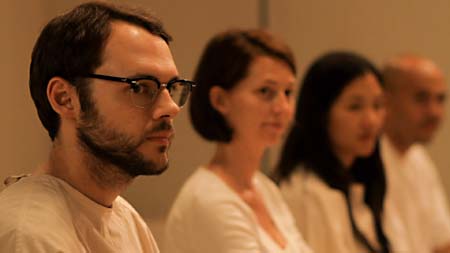 Sound of My Voice

Sound of My Voice is an impressive debut feature, directed by Zal Batmanglij and co-written with his star and co-producer, Brit Marling. (Marling also starred in and co-wrote last summer’s Another Earth, which premiered along with Sound of My Voice at the 2011 Sundance Film Festival, and the attention the two ethereally minded films received made her the It girl of the season.) The film creates a palpable vibe of uneasiness and uncertainty, and does so with an admirable economy of means – using drama, lo-fi sets and shooting strategies, and a paucity of reliable information to tell its story.

Peter (Denham) and Lorna (Vicius) are a couple of documentary filmmakers (as well as a romantic couple) in Los Angeles who are making a covert film about a cult that meets in a suburban basement in the San Fernando Valley. Its leader is the charismatic yet ethereal Maggie (Marling), who claims to be from the year 2054 and cannot leave the basement because of her allergies to the contemporary world. The disciples are blindfolded and taken to the meetings by bus in order to keep the location secret. Upon arrival, they are stripped of their clothing and dressed in loose, white attire, and Maggie enters dramatically, dressed in what seems to be a white shroud and hooked up to an oxygen tank. Peter and Lorna seek to expose Maggie as a fraud or a con artist, but as they become more immersed in her world, Maggie begins to bore into their heads.

Marling's performance is compelling – a mixture of physical fragility and psychological domination. We, too, wish to learn the truth of Maggie's mission. But the film devolves into a muddled third act that brings in outside elements that further obscure potential answers. The rapid denouement of Sound of My Voice probably reveals the film's original intent as a Web series. In the end, the film doesn’t add up to much of anything, but its individual parts are sometimes greater than its whole.

(This is an extended version of a review published in the Chronicle on March 18, 2011, when Sound of My Voice screened at the South by Southwest Film Festival.) 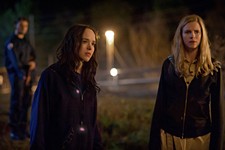