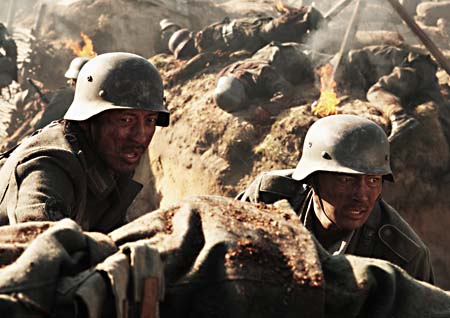 The most expensive South Korean film ever made is also one of the most realistic (read: gory) depictions of the horrors of war, specifically World War II, global cinema has ever produced. It makes the Normandy Beach sequence in Saving Private Ryan look like a mere skirmish. Suffice it to say, this isn't for the squeamish, but if you're into lovingly composed shots of crows feasting on the blown-apart entrails of battlefield carrion, you're in for a real treat.

An epic in every sense of the word, including the negative connotations of melodrama and a touch of Michael Bay's nationalistic flag-waving (tattered and splattered though it may be), My Way tells a stranger-than-fiction story of two men who initially meet as rival marathon runners in Japanese-occupied Korea. Kim Jun-shik (Jang) is a penniless Korean rickshaw driver and Tatsuo Hasegawa (Odagiri) is a high-born Japanese socialite. After a number of competitions that cement each character's competitive backstory, 1939 arrives and the pair end up in the same Japanese army but under decidedly different circumstances. Tatsuo is an officer, while Kim has been conscripted. That they continue their mercurial feud as long as they do – while bloodlust and doomed melees clotted with ghastly moments of breathtaking violence consume everything around them – is one of the linchpins of My Way. Eventually, once captured by the Russians and then by the Nazis, the war shifts their way as athletic self-reliance inexorably gives way to a mutually dependent survivalism. Such is war.

Shot by Lee Mo-gae (I Saw the Devil, The Good, the Bad and the Weird), My Way puts every one of its reported $25 million up on the screen and spares no expense when it comes to blowing the bejesus out of everything on screen. Not so great is Park Gok-ji's editing, which is as jittery and addled as a tweaker in the last hour of a three-day binge. Perhaps director Kang is attempting to replicate the abbreviated reality of combat with this overedited, dirt-and-brains-in-your-face style, or maybe he's just fetishizing Private Ryan's opening fusillade, but at times (frequently, in fact) the action in My Way is so chaotic that it’s hard to figure out who's killing whom or why or where. Too much is never enough for Jang, and as the body count passes, surely, the thousands, it all becomes a bit of a blur. And again, I suppose that may be the director's point. It's certainly his prerogative. But even hell has its own clearly demarcated circles. This nightmare just spirals around, epic though it may be.

The Warrior's Way
An Asian assassin seeks refuge in a small town in the American Badlands where ninjas and cowboys duke it out. 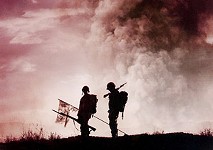 Tae Guk Gi: The Brotherhood of War
The most costly and the most popular film in South Korean history is also one of the most gripping and epic war films ever made.