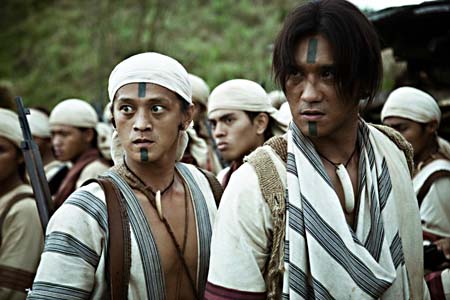 Warriors of the Rainbow: Seediq Bale

"Based on a history of Taiwan's aboriginal people," as the opening titles put it, this is a sweeping historical epic with no less than John Woo and his longtime producing partner Terence Chang serving as producers. It shows, particularly when the native Seediq tribesman – the film is set in the early 20th century in Japanese-occupied Taiwan – rise up against their Japanese oppressors with predictably bloody results. What Warriors of the Rainbow may have going for it most of all is Chin Ting-Chang's dreamy cinematography, which presents the native Seediq amid the sultry jungle greenery that brings to mind the absurdly lovely flora of James Cameron's Pandora. But the Seediq are no Na'vi: Alternately warlike and rife with internecine squabbling, they're woefully outgunned and mismatched against the Japanese.

Warriors, billed as the most expensive film ever produced in Taiwan, takes place mainly around 1930 and focuses on Seediq leader Mouna Rudo (Lin Ching-Tai), a charismatic figure in native face paint and a permanent scowl, who united the various tribal factions to take on the interlopers (referred to in history books as the “Wushe Incident"). The film pits native ferocity (rarely have I seen a film with so many beheadings) and scenes of more peaceful, communal living (the eerily beautiful Seediq songs, part of the tribe's ancestral storytelling, are spellbinding) against this historical event little-known in the West.

The version being released to theatres here has been truncated from an original running time of more than five hours – shades of John Woo's equally cut Red Cliff, but unless you're a scholar of Taiwanese history, you probably won't notice anything missing against all the jungle bloodshed and arrow-ridden bodies. If anything, Warriors feels overstuffed with subplots and military machinations. Doubtless, so did the actual historical events, but still, it can be difficult at times for a Western audience to keep track of who's winning this mad war of attrition. I suppose you could keep count of all those severed heads lying around, but in the end, it’s far more viscerally satisfying to watch those in gold-braided uniforms (the Japanese) get taken out by simple tribesman clad in traditional garb. (Shades of The Last of the Mohicans when you think about it, really.)

Warriors’ weakest link is its less-than-Cameron-esque use of CGI, which takes you out of the action onscreen and makes you wonder why a film that was originally five hours long didn't, instead, spring for some better CG-effects artisans. But that's a relatively minor quibble, I suppose. Warriors of the Rainbow: Seediq Bale is some sort of Taiwanese triumph on multiple levels. And given China's ongoing interest in the island and its unknowable future, this historical backstory behind current events is welcome indeed.