If I hadn't already read Skip Hollandsworth's Texas Monthly article recounting the tragicomic tale of Carthage's assistant funeral director Bernie Tiede, I'd swear this film adaptation was based on one of Joe R. Lansdale's East Texas gothics. As ever, truth proves itself stranger than fiction and the human heart (which is stranger and more inscrutable than anything). And Jack Black redeems himself (for Gulliver's Travels, among other things) with a subtly quirky performance that's one of his personal best.

Black plays Bernie, a devout Methodist and even more dedicated mortician's assistant in the tiny East Texas backwater. He's such a chipper, benevolent man that when he manages, against all odds, to befriend his opposite number – the loveless and loathed-by-all Marjorie Nugent (MacLaine, in another standout performance), the richest skinflint in town, who is a widow much older than Bernie – it's something of a major miracle. At first friends, then travel companions, then perhaps more, this bizarre May-December "romance" comes to a startling conclusion that involves Matthew McConaughey devouring scenery whole as local District Attorney Danny "Buck" Davidson. I'll say no more for those who are unaware of the facts since Hollandsworth, who co-scripted with Linklater, published his article way back in 1997 and memories are short.

Linklater intercuts Tiede's story with fond reminiscences of Tiede from actual Carthage residents (and a handful of familiar Texan character actors), only adding to the film's pleasantly oddball vibe, which intersects at the corner of Sunset Blvd. and Main Street, USA. I'm not sure how it'll play in Peoria, but I can pretty much guarantee it'll be held over in Carthage itself, so eloquently does it capture the peculiar rhythms of life and death in small-town Texas.

See “Texas Two-Step,” April 27, for a joint interview with Linklater and McConaughey. 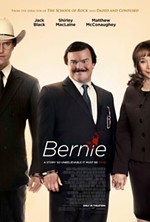