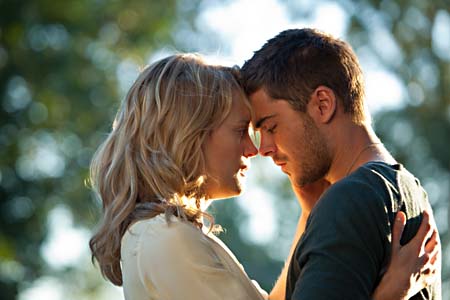 Normally I'm averse to reductionist terms like "chick flick," but The Lucky One, adapted from Nicholas Sparks' bestselling novel, is the chickiest flick you're likely to see this season. Depending on your taste in romantic fare, you'll either find it toe-curlingly dreamy or ploddingly predictable. Dismayingly, I fell into the latter camp. For a film that hinges on the notions of fate, destiny, and the apparent randomness involved in meeting one's soul mate, The Lucky One – from the writer who brought you The Notebook – is as timelessly shopworn as the sunrise.

That very fact, of course, makes it reassuring to some people. Love triumphs in the end, despite its circuitous route from the bullet-pocked villages of Iraq to a preternaturally peaceful Louisiana parish replete with a passel of wag-happy canines and Blythe Danner's wise nanna. Her eyebrows alone know and telegraph the innermost secrets of the heart to her heartbroken granddaughter Beth (Schilling). A year back, Beth lost her brother Drake in the war, and her alcoholic ex-husband Keith (Ferguson, who will make you wonder whatever happened to Ray Liotta) keeps threatening to take her to court over custody of their 8-year-old son Ben (Stewart). It doesn't help Beth's situation that Keith is a cop with strong political/familial ties, but all of this is icing on someone else's cake o' fate. That would be Marine Sgt. Logan Thibault (Efron), who found a dog-eared photograph of Beth amid the carnage of Iraq and has been searching for the gorgeous girl for the past year. Walking from Colorado to the Spanish moss-draped Louisiana environs, Thibault finally ends up at Beth's rural manse/dog-boarding business. You can guess the rest, and rest assured you guessed right.

Despite a needless voiceover narration that bookends the film, Efron is fine in the role of the mysterious stranger. It's the type of role Paul Newman might have played, circa 1964 – with a lot more quiet fire – and, indeed, Efron has similarly arresting eyes. The planes of his face, too, render him right for the role. The cast is uniformly fine across the board, even if Ferguson and LeFevre (kitted out in a poorly designed fat suit) play godawful countrified stereotypes. Alar Kivilo's cinematography makes the most of the lush, sultry setting, while Mark Isham's unobtrusive score is memorable for being utterly forgettable.

It's a wash, though, devoid of any of the true frissons that tend to accompany real-life romance. For all its soap-opera psychodrama, The Lucky One is pretty boilerplate stuff, with barely a smidgeon of surprise and a foregone conclusion. 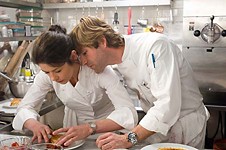 No Reservations
While No Reservations is no Big Night, it's surprisingly winsome in parts, by virtue of Catherine Zeta-Jones' performance, and a romantic fable that lingers on the palette of the mind's eye.