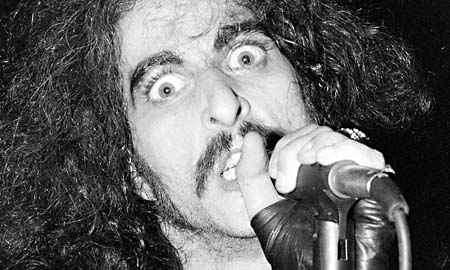 Bobby Liebling looks like Gandalf on crack, which, in a way, he is. Once upon a time, the theatrical lead singer of early to mid-Seventies hard-rock group Pentagram, Liebling has spent the past three decades living in his Jewish parents’ suburban Maryland "sub-basement" smoking crack, shooting heroin, doing meth, and generally being a trollish rock & roll disaster. If Spinal Tap set it to 11, Liebling has dialed it down to negative 1. Apart from a couple of disastrous "reunion" gigs in the early Eighties, the 54-year-old Liebling has completely jettisoned the sex and rock & roll from "sex, drugs, and rock & roll," and has come to embody a vicious, terrifying, and pathetic caricature of the beloved if disingenuous frontman's debauched lifestyle.

And that's where this engrossing (and sporadically gross) portrait of the pitfalls of near-fame and addictive personality disorder begins. It can only go up from that hellishly cluttered subbasement, and so it does. When a far younger metalhead and Pentagram fan by the name of Sean "Pellet" Pelletier meets this living corpse of a man whose music "changed his life," he takes it upon himself to save Liebling, re-release a substantial portion of the band's long out-of-print back catalog, and get the band back together. That's not as easy as it might sound, and watching Liebling struggle to cling with a junkie's fierce tenacity to his seemingly long-evaporated musical dreams, it doesn't sound easy at all. It isn't. Pitfalls (aka relapses), lovers, and the general disinterest of long-ago bandmates provide enough stumbling blocks to stagger even the hardiest of rockers, and Liebling at times appears to be already zombified, if not literally dead. He consistently makes Ozzy Osbourne look like Pat Boone, while actually looking not unlike a freshly deceased Jesus Christ – all that's missing are the crows picking the soft tissue from his bones.

As depressing as it may sound on paper, directors Argott and Fenton have crafted a deeply disturbing but equally moving documentary. Thankfully, it completely bypasses the presumed humor in the inherent absurdity of attempting to continue a rock & roll lifestyle long after the final feedback has faded away. The only jokes here are of the mordant variety, and yet the film is not without a sense of hope and the possibility of redemption. Complemented by a terrific score from Stars of the Lid (between assorted Pentagram tracks), this is maximum r&r all the way, with heart to spare. Kurt Vonnegut: Unstuck in Time
Why we write: the creative processes of the author as a human being Rock School
More than his Philadelphia school of rock, it's blustery instructor Paul Green who becomes the true subject of this documentary.