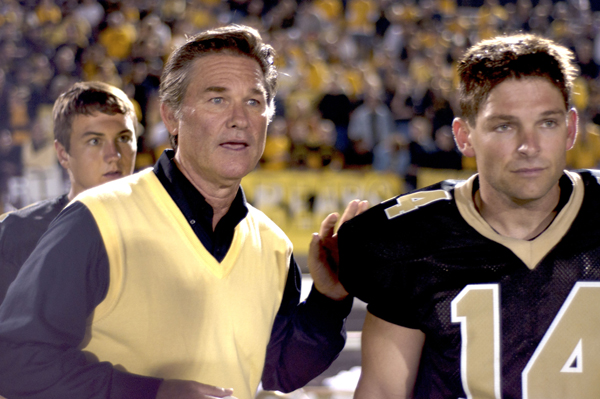 Apparently, the clamor for time-traveling sports films has reached such a fever pitch that even Snake Plissken himself couldn't resist the urge to join the on-field fray. Touchback comes with a high-concept pitch that probably proved irresistible: Small-town, high school quarterback Scott Murphy (Presley) gets clobbered during the final play of the big game, thus nullifying his money- and fame-laden future with the Ohio State University Buckeyes. Twentysomething years later, he's married to doting wife Macy (Lynskey) and has fathered a pair of plucky daughters. Macy's family farm, however, is in trouble with the bank; an early frost has killed his soybean crop and desperation hangs like a pall over his whole life. Defeated, he drives his rust-eaten Chevy pickup out to the fields, stuffs a rag in the tailpipe, and takes himself out of the game once and for all.

Alas, he awakens not in hogskin heaven but back where he started, as a strapping young athlete on the verge of the most important game of his high school career. Again. After some predictable comic business regarding this unexpected second chance – the ghost of Rod Serling is all over the film – Scott, armed with full knowledge of how the upcoming game is going to play out, gets his head back in the game and cowboys up. More important, he strikes up a relationship with band-camp wallflower Macy, the girl he never noticed during his first time around. There's much made (or remade, as the case may be) of his relationships with his factory-worker mom (Lahti) and amiably do-or-die coach (Russell), but for all the It’s a Wonderful Life meets Twilight Zone obviousness, Touchback is a quietly affecting film. While not exactly glorifying a fictionally perfect past, the film wears its unstinting love for small-town Americana on its jersey and makes its future seem awfully dire – which, of course, it is.

Presley plays both depressed farmer and suddenly sensitive footballer equally well. He never goes overboard emotionally and, indeed, the whole film feels less a paean to pigskin than a celebration of the emotional and spiritual validity of rough roads taken hard. David Rush Morrison's cinematography perfectly captures the overcast farm country of the Ohio River basin as well as the big game. Russell plays, essentially, a generic football coach but, as usual, brings a subtle snap to his role that is entirely winning. Touchback may accurately be called cornball hokum by some, but it's nevertheless a well-made film filled with heart and soul (and Snake Plissken).