The Kid With a Bike

Winner of the Grand Jury Prize at the 2011 Cannes Film Festival, The Kid With a Bike is indeed a towering achievement, perhaps all the more so because of its deceptive simplicity. This latest film from Belgium’s Dardenne brothers lives up to these filmmakers’ reputation for unsparing, unsentimental naturalism. This is a film that might have easily turned mawkish; likewise, it could have readily gone in an aesthetic direction toward parsimonious austerity. Yet The Kid With a Bike aims neither to break our hearts nor impress us with its ascetic discipline. All it wants to do is reveal to us the story of young Cyril Catoul (Doret).

As the film opens, Cyril breaks free of the orphanage in which he’s been placed in order to find his bicycle and his father, who has apparently abandoned him. He’s unsuccessful in both quests, though it’s tough to say which item he’s more desirous of recovering. Once Cyril is back at the home, a hairdresser named Samantha (De France) returns his bike when she notices another kid riding it and buys it back. One kind act leads to another, and Cyril begins staying with her on weekends. It’s impossible to say what prompts the boy to spontaneously ask this stranger if she will take him in; also unknown is why Samantha chooses to open her home and heart to this child. Rather than the details of the psychological needs that both parties are subject to, the film instead demonstrates how kindness can be its own reward.

Using long takes that soak in everything, the film observes every step of this pair’s odd dance from its awkward beginnings to its emergence into something more heartfelt and permanent. Events both predictable and unforeseen occur, all of it ordinary, and yet possessed of street poetry. How the Dardennes, time and again, turn gritty, mundane subjects into transcendent moments of honesty and truth is one of the great cinematic wonders. Their stories are indelible, and you owe it to yourself to view things from their perspective. 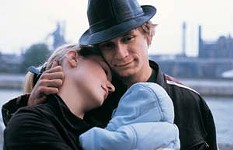