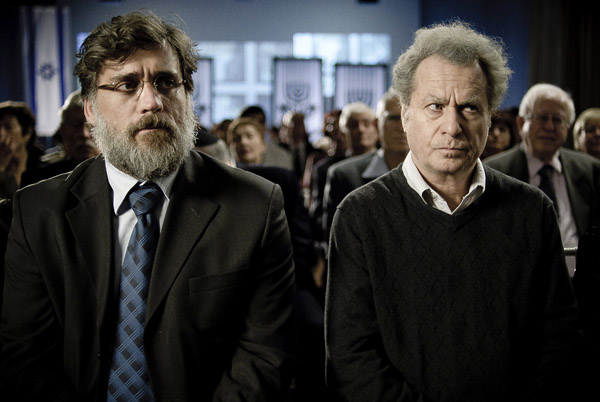 The usual strife between fathers and sons charts an uncommon course through academia in this laceratingly comic and award-winning Israeli film. The Shkolnik men – father Eliezer (Bar Aba) and son Uriel (Ashkenazi) – have been able to maintain a respectable if distanced regard for each other well into the son’s middle age, but as the film opens, that fragile détente is shown to be unraveling. Both men are professors in the Talmud department of Hebrew University, but amiable colleagues they are not. Eliezer, a philologist, has spent his life pursuing an arcane bit of Talmudic esoterica and regards the mention of his own scholarship in a footnote within an important tome to be the pinnacle of his life’s achievement. Unlike his detail-oriented father, Uriel is a prolific author and basks in the attention of public-speaking engagements and popular acclaim. The straw that breaks his father’s delicately balanced composure, however, is the announcement that Uriel is to be the recipient of the Israel Prize, the country’s most prestigious national award.

The film opens with Uriel’s acceptance of the prize, during which the camera stays doggedly on Eliezer during his son’s speech. The prize is something for which Eliezer has been in contention for at least 16 years but which has never come through. Footnote then goes behind the scenes to show us how all this has come to be, and it is a story that surmounts mere father-and-son rivalries. Intradepartmental spats and jealousies come into pronounced focus and are revealed as the ambient poisons of academia. Writer and director Joseph Cedar (Beaufort) allows each character his individual grievances and moral dilemmas, and films them in a way that permits us to both laugh at each one’s petty tenacity while equally admiring the obsessive determination.

Written chapter headings break the action every so often in an unnecessary nod to literary ambition. They wind up being more distracting than helpful. And I’m not sure if some of the details of Talmudic scholarship are as impenetrable in Israel as they are abroad. Those details are insignificant, at any rate, to a full appreciation of Footnote. This is a film that skims the surface layer of politesse from human interactions and reveals us as the blustering bundles of ego that we all are. 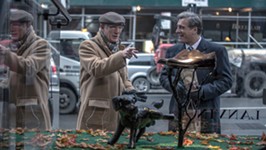 Norman: The Moderate Rise and Tragic Fall of a New York Fixer
The man who would be kingmaker 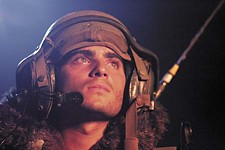