The Salt of Life

Although it’s told in a breezy fashion, The Salt of Life wishes to address dispiriting subject matter: an aging man’s psychological trauma when he recognizes that he is no longer viewed as a sexual object by women. This Italian import may have greater resonance for the men of Casanova’s native land than it does internationally, but it definitely hits on truths infrequently addressed in the movies. Yet director, co-writer, and star Gianni Di Gregorio (Mid-August Lunch) barely scratches the subject’s surface, and even when he allows the character to get nicked, the filmmaker is more likely to cover up the wound with concealer rather than any kind of disinfectant. The character winces at the world through heavily lidded eyes; stares at his wrinkles in the mirror; tries a few yoga poses (which throw his back out); swallows a boner pill at the insistence of his wingman (Santagata), who sends him out to a brothel; and looks up old girlfriends – all of it is conventional movie material and The Salt of Life adds little to the conversation.

Giovanni Brandori detto Gianni (Di Gregorio) has been forced into early retirement and now spends his days running errands for his wife, walking the dog, and responding to every beck and call of his rich, elderly mother (De Franciscis Bendoni, who served a similar function in Mid-August Lunch). He is in the constant company of women but his virility is invisible to them, which has him worried that he’s going to end up like the old guys in their track suits who sit on the corner all day leisurely gabbing and nursing their coffees. At the movie’s climax, he imbibes a spiked drink provided by the young woman downstairs, a platonic neighbor whose dog he frequently walks. We can tell Giovanni is pleasantly tripped out because he does yet more original things, like sitting down in the middle of traffic and wading in a public fountain. These acts lead him to his lustful fantasy conclusion, set to the tune of the Pixies’ “Here Comes Your Man.” So hyperbolic are his fantasies that it’s clear that not only will they never come true, but they never were true to begin with. Seems to me that’s a better place to begin than end.

This film is an AFS Selects pick. 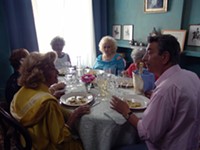 Mid-August Lunch
The director of this Italian film, Gianni Di Gregorio, also stars as a middle-aged bachelor who lives with his mother and cooks for her friends.