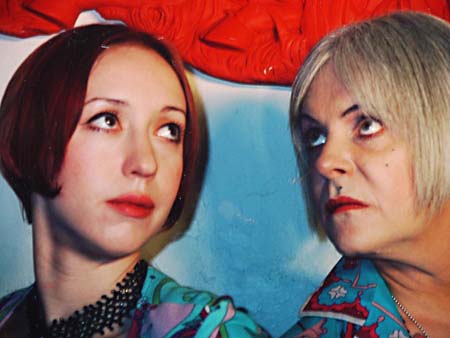 The Ballad of Genesis and Lady Jaye

What is love? That question is answered in what is beyond a doubt the single most deliriously romantic film I've seen in years. This life- and love-affirming portrait of two unconventional outsider artists who become one is an intimate portrait of performance artists sui generis: Genesis P-Orridge, originally Neil Andrew Megson and the godfather of industrial music (Throbbing Gristle, Psychic TV) and his lover and muse, Lady Jaye, who was born Jacqueline Breyer and worked as an East Village dominatrix. So heady and hungry was their passion for each other (and their art) that they chose to undergo extensive plastic surgeries in order to become a single entity: the pandrogyne Breyer P-Orridge – two bodies, one soul. They even went so far as to receive tattoos mimicking each other's moles and beauty spots. Now that's amoré!

Blond gamine Lady Jaye passed away in October 2007 and this Ballad is something of an ode to joy, albeit one that might have Ludwig van Beethoven and Friedrich Schiller rolling over in their respective graves. Assembled from a delightfully wild wealth of home movies, concert footage, and what P-Orridge calls "ephemera," director Marie Losier (who has previously collaborated with Winnipeg's Guy Maddin and San Francisco's Kuchar brothers), plunges the viewer into a giddy loving spree that manages to look and feel simultaneously avant-garde and yet oddly in line with so-called "traditional values." (Like their fictional forerunners, the Addams Family, these freaky social outcasts evince more mutual affection and offbeat humanity than 95% of their "normal" counterparts.)

Losier's documentary style is completely in keeping with her subject(s). She stitches together household episodes, clips, bits of performance art, and snatches of TV gigs in a fashion directly inspired by the "cut-ups" technique of William S. Burroughs' (along with Brion Gysin, an early mentor to P-Orridge). The result is inspired – P-Orridge narrates and reminisces) – perfectly evoking the pair's relentlessly creative life and times. Much of the footage, so far as I can discern, has never been seen before by the public, and the ultimate picture on display is one of domestic and creative bliss. "I just want to be remembered as one of the great love affairs of all time," says Lady Jaye.

The irony, if you choose to view it as such, is that P-Orridge, an artist/prankster/champion of individuality and individual freedoms over the mundane status quo and normative social mores, found true love and the utmost joy by joining so fully with his soul mate that both individuals were, effectively, lovingly, obliterated. In the act of creating the pandrogyne Breyer P-Orridge, the pair transcended traditional Darwinian evolution and produced a living, breathing piece of flesh-and-blood art of the highest caliber. True love is never having to say goodbye … because when you look in the mirror, there s/he is.

Cassandro, the Exotico!
Back body drops, and in high heels

The Ballad of Genesis and Lady Jaye, Marie Losier