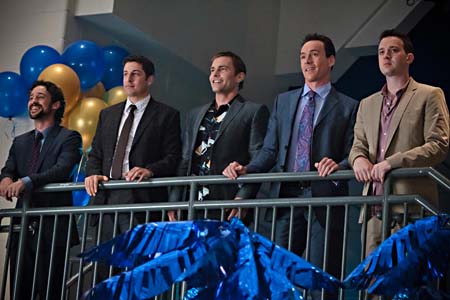 Thirteen years after the Weitz brothers forever defiled the great American apple pie with sexual innuendo and jump-started the joys of cam sex for a generation, this fourth film in American series (not counting four direct-to-DVD spin-offs) proves to be, quite honestly, the best of the lot thus far. Part of this film's winning appeal may be the nostalgic and nearly complete return of American Pie's original cast. Somewhere amidst the lesser sequels (2001's American Pie 2, 2003's American Wedding) and now, I'd forgotten that the original arrived in theatres a scant 26 months prior to 9/11, an event that in ever-increasing hindsight changed not only geopolitics but also the politics of the American teen comedy. (Think that's a stretch? Go watch the recent Project X and then we'll talk.)

Suffice it to say directors Hurwitz and Schlossberg, the comic minds behind the Harold & Kumar films, have returned this group of hormonally charged ex-teens to the Weitzes’ original vision of sweet-natured raunch via a class of ’99 reunion storyline. The result is akin to curling up under your favorite quilt and revisiting some old friends you haven't seen in good long while. The bawdy humor – embodied, natch, by Seann William Scott's immortal Stifler (and hoo boy, you can bet I never dreamed I'd someday be using the word "immortal" to describe Scott's character back in 1999!) – is in full, goony effect. There are a handful of retro Nineties gags that fall flat, but for the most part, the film is a genuine ace: well-acted, -directed, and -shot, with just the right amount of minor melodrama and well-penned dialogue for all involved. It's laugh-out-loud funny in all the right ways.

This time out, more than a few of those laughs come courtesy of the great Eugene Levy, he of the lepidopteran eyebrows and ever-ready overadvice. Levy has a far more substantial role in this film than in the previous ones, and he employs his comic chops in wonderful, surprising ways. His character's son, Jim (Biggs), and Jim's wife, Michelle (Hannigan), have a child now, and the dreaded seven-year itch has surfaced to muddle their otherwise storybook life. Worldly, sloe-eyed Finch (Thomas) is, apparently, a globe-hopping adventurer; Oz (Klein) is dogged by his long-ago appearance on a So You Think You Can Dance? knockoff; and, in general, the old gang seems to be living all the wrong lives, or, at the very least, living them in wrong or unsatisfying ways. And voilà! There's your reunion. Even Stifler's mom (the always welcome Jennifer Coolidge) makes a cameo.

Of course, if you loathed the first film, this one probably won't do much to change your mind. But fans, and I count myself among them, of the Weitz brothers' unexpectedly enjoyable original will find themselves in a familiar and perhaps comforting place … filthy language, risqué situations, die-hard friendships, and all. 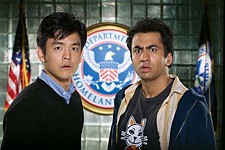