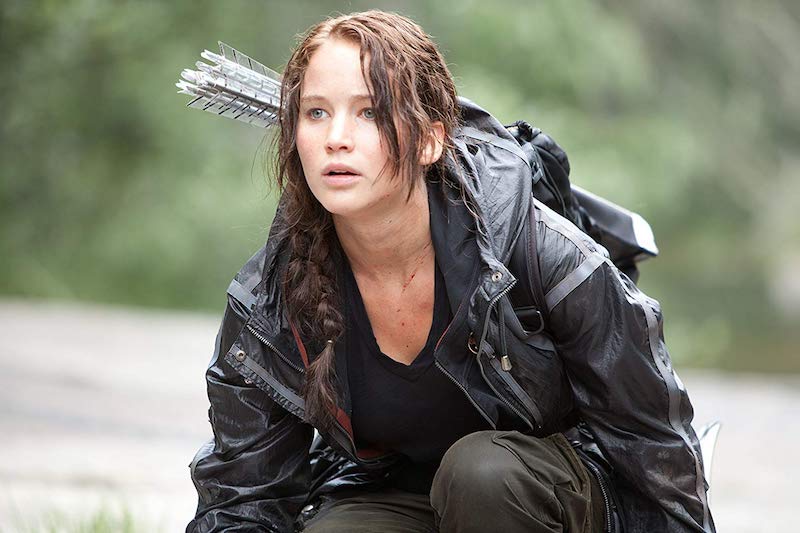 At a time when a virtual war on women has rocketed to the front lines of the great American culture wars, it's a stunning indication of exactly how out of touch with reality are those who would be our leaders that The Hunger Games books have been so wildly successful. Set in a dystopian future in which the wealthy, decadent elites of the Capitol control the poor and starving districts of postapocalyptic Panem, aka America, Suzanne Collins' trilogy of young adult novels has at its core the resourceful, intelligent, and fierce femininity of Katniss Everdeen (Lawrence). It's hard to imagine a more indicative cultural bellwether than the hugely popular source novels, whose twinned themes of a Big Brother-ly future and a patriarchal state where teens are forced to slaughter one another for the entertainment of adults are not so far from the current motivations of the Occupy and Anonymous movements. (Young people reared on Collins' trilogy would be more likely to occupy the likes of Rick Santorum's face with a fist than yield to the archaic notions of dutiful womanhood and obedient youth. Good for them.)

Thankfully, with Collins on board for the film version as both co-screenwriter (alongside director Ross and Billy Ray) and producer, the story and action here hew bone-close to the source material. Jennifer Lawrence feels perfectly cast as Katniss, one of two teens from the Appalachian-looking District 12 to be chosen to compete in the Hunger Games. Adults will be familiar with the skeleton of the storyline, which echoes not only Shirley Jackson's short story "The Lottery" but also the much-maligned but creepily prescient Stephen King story/Arnold Schwarzenegger movie, The Running Man. (I'm not even going to attempt to get into the whole Battle Royale debate here, except to say that if you haven't yet seen that masterfully horrific Kinji Fukasaku movie, you really should.) Suffice it to say that the state (nicely embodied here by Donald Sutherland), as a means of controlling the masses, annually sets a gaggle of young people against one another in a fight to the death while broadcasting the whole nightmarish ordeal live.

Woody Harrelson turns up as the prior game survivor, Haymitch, who tipsily mentors Katniss and co-contestant Peeta (Hutcherson), and Stanley Tucci, as the game host/commentator Caesar, is absolutely off the rails (in a good way, not unlike the late Richard Dawson in the aforementioned Running Man).

The Hunger Games is first and foremost an adventure/survival story, and director Ross keeps things moving with nary a moment of downtime. There's precious little fat on the script; it's a lean, mean antifascist machine, and Lawrence is at once winsome and spectacularly engaging as Katniss (so much so that all her male costars pale into near-blandness in comparison). YA novel-to-screen adaptations rarely get it right the first time – see Potter, Harry – but The Hunger Games is a welcome (and seriously kickass) exception to that rule. 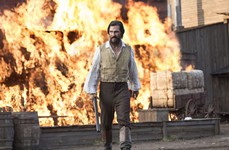