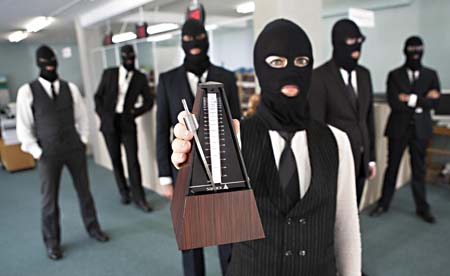 If you’re looking to fill out your weird quotient for the week, there’s no better option in town right now than this Swedish film doozy. Unique to a fault, Sound of Noise is a daft police procedural, an absurdist comedy, a piece of metaphysical agitprop, a music-performance film with a bit of story attached, and/or none of the above. In the police files, it might be logged as the case of the anarchist percussionists and the tone-deaf detective.

A group of percussive anarchists are running amok in the city, leaving behind a metronome as the only clue to its identity. Its new composition, Music for One City and Six Drummers is a revolutionary piece designed to thwart government restrictions and thumb a nose at the musical establishment. It’s a work in four movements, each movement occurring flash-mob-style at a specific location. The first movement, “Doctor, Doctor, Give Me Gas (In My Ass),” takes place in a hospital’s operating room as the masked drummers wheel in a fat, blowhard patient whose body is used as a percussive instrument along with sundry clamps, tubes, scalpels, and medical devices. Another movement is set in a bank where one of the key musical sounds is that of a paper shredder macerating money. Clearly, the man to solve these bizarre crimes is the brilliant head of the city’s anti-terrorist squad Amadeus Warnebring (Nilson), the tone-deaf, music-hating scion of an otherwise musically gifted family.

Sour-faced Warnebring is tormented by the case, yet he is also beguiled by the drummers’ ringleader Sanna Persson (Halapi). In her own way, Sanna is a fellow black sheep who was expelled from the conservatory for her unconventional choices of musical instruments. There’s not that much more to Sound of Noise than its absurd premise, although it’s carried out with a degree of conviction that’s hard to beat. The performances are all full-length, which can grow a bit wearying. The effect is as if the performers of Stomp broke loose from the stage to run rampant across the city. The film’s joke is kind of one-note, although it maintains an exhilarating beat throughout. If Sound of Noise is the rhythm of the new city symphony, play on.