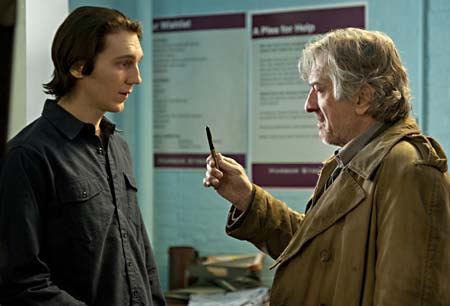 Playing another deranged taxi driver in Being Flynn, his latest film, it’s as though Robert De Niro’s acting career has come full circle. Although De Niro’s Jonathan Flynn shares nothing but an occupation and irrational thought patterns with the infamous Travis Bickle, Flynn is a less vivid and penetrating creation than De Niro’s 1976 taxi driver. It’s not that the actor’s skills have faded over time, despite the fact that De Niro has been coasting on his freshly mined comic vein, which gushed forth in the late Nineties with Jackie Brown and Analyze This and congealed in the next decade with the Fockers trilogy. Being Flynn returns De Niro to the dramatic fold and gives him more to chew on than most of the films in his recent past. But still, it’s not enough to hold us rapt for the entire film.

Then, too, there is Paul Dano, who, in his fairly young career, has demonstrated amazing dramatic dexterity in films such as There Will Be Blood and Little Miss Sunshine. Yet in Being Flynn, he is a bit of a cipher. His face doesn’t often register the emotions we presume the character is experiencing, though that blankness makes him a good foil for De Niro’s more showy performance. Dano plays Nick Flynn, the son of misanthropic Jonathan, who rants that he is one of three great American authors (the other two being Mark Twain and J.D. Salinger). Boozy as he is, Jonathan gives off more of a Charles Bukowski vibe, and as a parent, he has been absent all of Nick’s life. In his 20s, Nick is sort of drifting when he resumes trying to write (after a catastrophic earlier experience) and begins working at a New York City homeless shelter at the suggestion of his girlfriend (Thirlby), who also works there. Being Flynn is to be appreciated for its reluctance to go the conventional father-and-son-rapprochement route and instead giving us something more prickly and vexing. Jonathan and Nick will never head off together into the sunset toward a poetry reading.

The film is adapted by Weitz (About a Boy and De Niro’s Little Fockers director) from Nick Flynn’s autobiographical book, Another Bullshit Night in Suck City. I haven’t read Flynn’s book but it seems as though the problem with Being Flynn can be best illustrated by the whitewashing the book’s title underwent on its road to the screen, rendering the pungent bland. Fall Out Boy provides a nice, strings-heavy soundtrack for the film, and the performances offer flashes of passion. But on the whole, the film feels detached and morose, just like its characters.