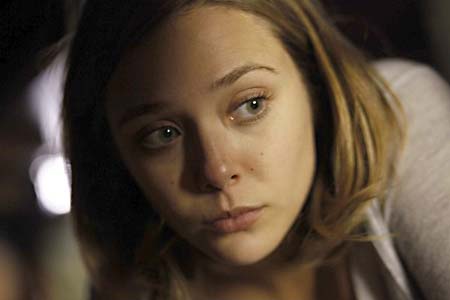 It's now abundantly clear that Elizabeth Olsen is the artistically gifted Olsen sister, especially when it comes to the near-preternatural mastery she displays over her face. In Martha Marcy May Marlene, Olsen radiated anxiety and perhaps madness, from her very pores. In the gimmicky and only sporadically effective Silent House, she's more freaked out if anything, and she puts her facial muscles through an unsettling series of contortions meant to express the growing unease and then outright terror of her situation. She wears a permanent mask of tension that eventually slips off and grows vicious. (One of the unfortunate side effects of these extreme close-ups is a persistent if unbidden memory of Heather Donahue's sweaty visage in The Blair Witch Project.) Unfortunately, the end horrors are telegraphed (subtly, but still) too far in advance, thereby denuding the payoff of its rightful, righteous shriek.

Directors Kentis and Lau had a terrific gimmick with their first film, Open Water – they swam with and their characters were eventually devoured by live sharks. This time, the pair goes for something even more dangerous: shooting the entire film in one continuous take. It works up to a point, and just the idea of rehearsing the actors gives me a queasy feeling in the pit of my stomach. The story is simplicity itself (and a feature-length expansion of the 2010 Uruguayan film La Casa Muda). Sarah (Olsen) is helping her father (Trese) and uncle Peter (Stevens) renovate the family's rural, woodsy manse, a boarded-up wreck of a place somewhere out in the country that lacks (naturally) both electricity and cellphone reception. Things go odd early on as both Uncle Peter and Dad seem to be walking on existential pins and needles around Sarah, while a mysterious and unremembered childhood playmate appears and makes outré conversation. Something is up here, but what?

Silent House gives the game away too easily, but it does have some effective shocks along the way. Its most remarkable featis sustaining the level of forebodeingly atmospheric suspense. That's difficult enough to pull off in the "reality horror" subgenre (Paranormal Activity and its offspring) of which Silent House is a not-so-distant relative, but attempting to do so in one 86-minute take is pretty ballsy stuff. It works, but how well will depend on your familiarity with certain genre tropes (repeated shots of mirrors, seemingly random dialogue pregnant with symbolic portent). I didn't jump once, but you might. 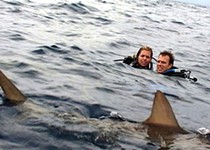 Open Water
Is it wrong to root for the sharks?