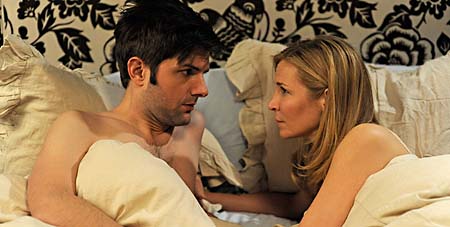 A few months ago we had the movie Friends With Benefits, which explores the potential of heterosexual friends also maintaining a sexually casual and viable relationship. Now the zeitgeist has brought us around to Friends With Kids, in which heterosexual best friends test the possibilities of dually raising a child without the benefits of a sexual relationship or shared domicile (although, conveniently, these partners live in the same Manhattan apartment building).

Writer/director Jennifer Westfeldt most definitely has her inner ear tuned to the relationship issues that plague modern American singles. Friends With Kids is Westfeldt’s first shot at directing, which she handles quite ably. The two previous films she scripted (and starred in, as she does here) were also romantic comedies that looked at the perplexed state of loving partnerships in the 21st century. In her 2001 screenwriting debut, Kissing Jessica Stein, she played the title character who answers a personal ad in the Women Seeking Women section of the classifieds when she becomes fed up with her heterosexual options. Ira & Abby in 2006 saw her playing the distaff half of a couple that hastily marries as an experiment and is then beset with all the inevitable pitfalls. Westfeldt is acutely sensitive to the dark worries that disrupt the sleep of American singles. Her writing is astutely attuned to the querulous inner voices and outer influences that peck away at the self-confidence and personalities of the unmarried. (This empathy becomes all the more striking with the realization that Westfeldt is the longtime companion of Mad Men heartthrob Jon Hamm, who also co-stars in Friends With Kids.) Yet for all her sharp perceptions and explorations of alternative relationships, Westfeldt adheres to conventional wisdom when orchestrating her stories’ outcomes. Friends With Kids is little more than a well-written and nicely delivered feature-length sitcom.

Julie (Westfeldt) and Jason (Scott) are BFFs since college who are now in their late 30s. Julie has never found a lasting romantic partner and Jason has never bothered to look, preferring to play the field. With great candor, they discuss and agree that neither of them is the other’s type. Julie and Jason are also dear friends with two other couples: Wiig and Hamm playing a sexually voracious duo, and Rudolph and O’Dowd portraying a married couple who announce their new pregnancy at the start of the film. Friends With Kids also casts a keen eye toward the changes in relationships that occur when couples procreate. Julie and Jason believe they can rise above those pitfalls by having a baby together while living separately. Each will be “100% committed half the time.” Well, it doesn’t take a brainiac to see how this premise is going to play out. But, like a sitcom with a foregone conclusion, I suppose the fun is to be had in getting there, and Friends With Kids definitely has bright moments amid its predictability. 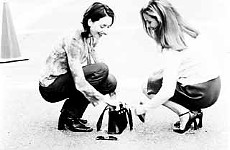