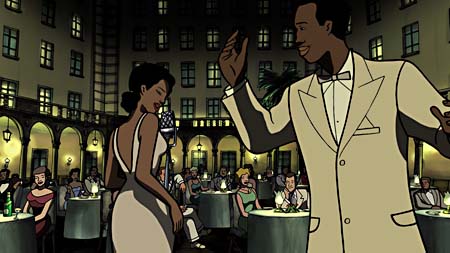 The titular, star-crossed lovers are the focal point of this Spanish-language nominee for Best Animated Feature, but the music is the real star. Scored by Cuban pianist Bebo Valdés (who garnered international acclaim in director Fernando Trueba’s 2000 Latin jazz documentary Calle 54) and featuring songs by Dizzy Gillespie and Charlie Parker, the film rockets from the glitzy cabarets and sweaty dive bars of Havana, 1948, to bebop’s heyday in New York City and Paris jazz joints to the studio soundstages of Hollywood’s Golden Age.

Framed as the recollections of Chico as an old man, Chico & Rita charts the tempestuous romance between two musicians, the piano prodigy Chico and saucy chanteuse/muse Rita. (Voice actors Limara Meneses and Emar Xor Oña do the talking, while Idania Valdés and Bebo Valdés supply Rita’s singing and Chico’s ivory twinkling.) Their affair is the stuff of an old-school Hollywood sudser – Douglas Sirk would’ve had a field day with all the backstabbings, broken vows, and sighing reunions – and the film, top-heavy with the back-and-forth romance, benefits from an intriguing subplot about Rita's struggles with the kind of ingrained entertainment industry racism that dogged the careers of performers such as Lena Horne and Lupe Velez.

As for another kind of inequity, it turns out the gender imbalance in full-frontal nudity carries over to animation, too; see nude Rita – a lot of nude Rita, her hand-drawn pubic hair like a laughable, immovable merkin. Co-director and artist Javier Mariscal has had a storied and awarded career; among his accomplishments, he designed Cobi, the cartoon mascot for the 1992 Barcelona Summer Olympics. His static, more impressionistic images can be arresting, as in the poster he designed for Trueba’s Calle 54. But in Chico & Rita – and excepting a lively and abstract interlude of a neon-shock dreamscape – the animation is uninspiring, corny, even. (How come all the white people look like background players from the G.I. Joe: A Real American Hero cartoon?) The very best animation can excite the senses and inflame the imagination. But Chico & Rito's charmless line drawings just made me wish the film was live-action instead. Calle 54
Superstars of Latin jazz are captured as they perform in the studio.